Pioneering Cruise Ship Arrives in India to be Scrapped!

The first newly built cruise ship for Carnival Cruise Lines, which was launched at a critical moment in the development of the modern cruise ship industry, has ended its 38-year career.

Introduced in 1982 as the Tropicale, this pioneering cruise ship has been beached at the scrapyards in Alang, India.The construction order for the Tropicale was placed just eight years after Carnival began operations and came at a time when the cruise industry was mostly using older passenger ships repurposed for cruising. No new cruise ships had been built since the mid-1970s and at the time some forecasts doubted that another passenger ship would ever be built. Carnival had survived a rocky start, nearly going bankrupt before entrepreneur Ted Arison took full ownership of the line and using a “fun ship” marketing theme successfully turn around the company’s finances. Carnival was operating three former liners while Arison had visions of rapid growth.The order for the first newly built cruise ship went to the Danish shipyard Aalborg Verft for a 36,000 gross ton passenger ship able to accommodate approximately 1,000 passengers. At 671 feet in length, she was far from the largest passenger ship, but was among the ranks of the largest cruise ships then in service. The Tropicale as she would be named would become a transitional cruise ship laying the foundation for the future expansion of Carnival and the cruise industry.She entered service in 1982 sailing from Miami to the Caribbean, but she would also become a pioneer for the cruise line sailing to Mexico and Alaska and later being homeported in Tampa and New Orleans. As a modern ship, she featured the latest amenities and also used bright colors in its decor that echoed the fun ship marketing. The Tropicale was also the first Carnival cruise ship with a winged funnel shape, known as the whale tail, that became one of the signature design elements that continues with all the company’s ships. 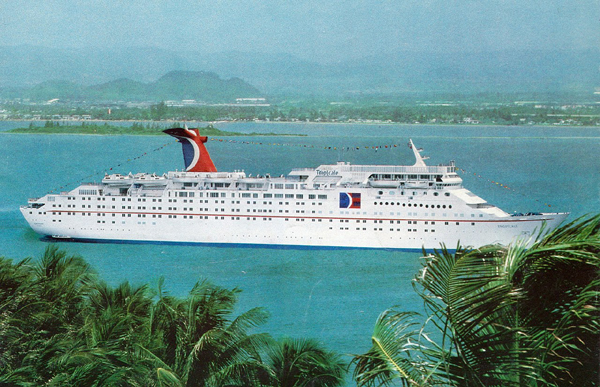 It was the beginning of the expansion of the company that would make them one of the industry’s leaders and part of the largest cruising corporation in the world.Shortly after Costa Cruises became a wholly-owned subsidiary of Carnival Corporation, the Tropicale left Carnival Cruise Lines in 2001 renamed the Costa Tropicale. She sailed for the Italian cruise line till 2005 when replaced by new constructions she was sent to Australia to sail for P&O Cruises. She sailed as the Pacific Star from Australia and in the South Pacific for the next three years before being sold to Spain’s Pullmantur in 2008 and renamed the Ocean Dream.
In the fall of 2020, Peace Boat announced that was retiring the Ocean Dream and when its world voyages resume they would be operated on a newer, larger cruise ship. Princess Cruises’ Sun Princess was acquired as part of Carnival Corproation's efforts to accelerate the disposal of older tonnage. The Sun Princess will be renamed the Pacific World to continue Peace Boat’s world cruises.The Ocean Dream ex Tropicale became like many 1980s vintage cruise ships a victim of the pandemic. Smaller in size and outdated by the growth of the cruise industry, she was sold for scrap.