THE 35-member crew of a North Korean ship detained for smuggling Cuban weapons under 10,000 tonnes of sugar is likely to be returned home in a month, according to a Panamanian government official familiar with the incident. 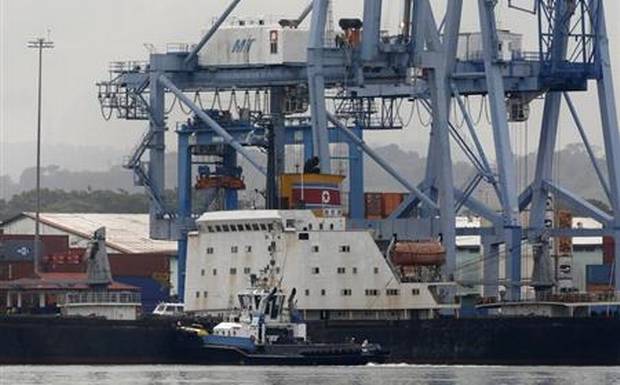 THE 35-member crew of a North Korean ship detained for smuggling Cuban weapons under 10,000 tonnes of sugar is likely to be returned home in a month, according to a Panamanian government official familiar with the incident.

"Most likely they'll go back to Korea," the official said on condition of anonymity. "There is another possibility that they will be returned to Cuba and from there go to Korea."

Panama will not respond to a request from Pyongyang seeking a "diplomatic manner" to resolve the future of the ship, the 3,990-dwt Chong Chon Gang, until the UN Security Council determines whether the shipment breached a wide-ranging North Korean arms embargo, according to Reuters.

The ship was carrying aged Soviet weapons in Cuba's arsenal, which once Canadian military expert, a professor at Royal Military College, Kingston, speculated they were being taken to North Korea for maintenance and repair because that country still had large stocks of outdated Soviet weaponry.

Cuba later acknowledged it was sending 240 tonnes of "obsolete" weapons, including two MiG jets, 15 MiG engines and nine anti-aircraft missiles, to be repaired in North Korea and returned to Cuba.

The crew have been charged with threatening Panama's security by seeking to move undeclared weapons through the Panama Canal. The Panamanian government official did not say why the crew would be released or how the charges would be dropped.

A team of six UN Security Council experts arrived in Panama recently and will issue a report on whether the weapons violate a seven-year-old UN ban on arms transfers to North Korea because of its nuclear weapons and missile development.

North Korea sent an email through its embassy in Havana to Panama, requesting "friendly cooperation" to resolve the incident in a "diplomatic manner."

But a Panama official said: "There is nothing to discuss with the Koreans. There isn't a diplomatic resolution in this case and it's already in the hands of the UN Security Council."

Panama last month approved visas to North Korean diplomats to visit the crew, then withdrew them after they also requested permission to participate in the inspection of the ship.