Palmali group of companies launched the 'Shovket Alekperova' tanker on Thursday, May 1 at the Turkish Beşiktaş Yalova shipyard.

The tanker, built on RST22M project, has a load-carrying ability of 7,000 tonnes, according to a message from the company. The RST22M series includes fourteen ships (plus five in option).

A distinctive feature of RST22M, RST22, 005RST01 and RST12 design tankers  is full revolving rudder propellers, increased trunk and submersible cargo pumps. They have no longitudinal bulkhead in CL and no framing in cargo tanks.

The vessels satisfy the Volga-Don Canal and the Volga-Baltic Waterway dimensions.

At the initiative of Azerbaijani businessman Mubariz Mansimov who owns Palmali, the tanker was named after the outstanding Azerbaijani singer, People's Artist of Azerbaijani SSR, Shovket Alakbarova.

The vessels built on the RST22M, RST22, 005RST01 and RST12 projects, are distinguishable for the possibility of using the full-revolving propeller-steering columns as a single movement and control means, absence of longitudinal bulkhead in center plane, usage of submersible pumps, complete absence of framework in the cargo tanks and a developed trunk.

The vessels correspond to the dimensions of the Volga-Don Canal and Volga-Baltic Waterway. The overall length of the RST22M project vessels is 139.95 meters, width - 16.6 meters, the board height - six meters.

The vessels belong to the Volgo-Don Max Class.

They also fully comply with new international requirements for vegetable oil transportation, and have two watertight compartments for floodability reduction.

The design of the vessels meets the special requirements of Russian and international oil companies and additional ecological restrictions of the Russian Maritime Register of Shipping ECO Project (ECO-S) class.

The vessels satisfy the Volga-Don Canal and the Volga-Baltic Waterway dimensions.

The new design tankers feature reinforced marine capabilities as compared with the Armada first series, with a deadweight increased by 750 tonnes in sea and increased capacity of cargo tanks while maintaining river capabilities.

The design was tailored to meet the specific requirements of Russian and global oil companies, additional ecological restrictions of the Russian Maritime Register of Shipping «ECO PROJECT» (ECO-S). 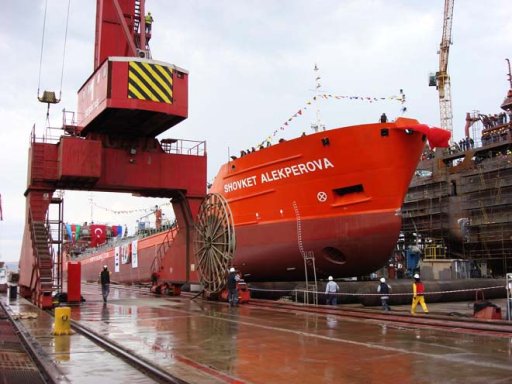