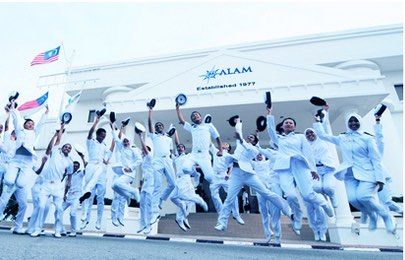 Over 100 new seafarers graduate from Malaysian Maritime Academy (ALAM) at 113th Convocation Ceremony
Malaysian Maritime Academy (ALAM) celebrates its 113th Convocation Ceremony today with 111 ratings graduating from the Academy ready and fully prepared to embark on a challenging seafaring career.
The graduates are the first to qualify from ALAM with the new 2010 Manila Amendments to the Standards of Training, Certification and Watchkeeping (STCW) Convention – a revised maritime and training standard compulsory for all seafarers.
YBhg. Dato’ Haji Baharin Bin Dato’ Abdul Hamid, Director General of Marine, Marine Department Malaysia, officiated at the event and said: “I am confident in the quality of training provided by ALAM as it complies fully with the 2010 Manila Amendments to the STCW Convention and is monitored and audited by the Marine Department of Malaysia.
“ALAM, as a leading global maritime academy, is ranked amongst the top training establishments in the world today and complies with the requirements of most maritime authorities worldwide including the UK Maritime Coastguard Agency, Australian Maritime Safety Agency, Norwegian Maritime Directorate and the European Maritime Safety Agency”.
Also speaking at the ceremony, David Fredrick, Chief Executive Officer of Malaysian Maritime Academy, said: “We are delighted to see another successful convocation ceremony and 111 new additions to the maritime work-force. We constantly strive to improve the quality of our training ensuring we produce competent and reliable seafarers equipped with the latest knowledge and expertise required by the global shipping industry.
“It is important that ALAM supports the national agenda and encourage more Malaysian school-leavers to consider the maritime industry as a viable and rewarding career option.”
He added: “The 111 students who graduated today are equipped with the knowledge necessary to support the ship owners of Malaysia and across the world. To us, the quality of the seafarers we produce for the industry remains our utmost priority.”
MMASB, a privately-owned company entrusted to manage ALAM, has been operating the Academy since its privatisation in 1997
ALAM’s graduates are employed by companies from many countries including Japan, Singapore and Australia which is a firm endorsement of the quality of training given.
With over RM250 million invested in sponsorship for its cadetship and ratings programmes and more than RM75 million invested in training infrastructure, MMASB has developed ALAM into a globally recognized Maritime and Education Training Centre which is now ranked among the top Maritime, Education and Training centres in the world
The majority of the 111 ratings graduating today were sponsored by Skills Development Fund Corporation (PTPK), who sponsored 73 students and the Federal Land Development Authority (FELDA) who sponsored 15 students. 13 students were self-sponsored.
The graduation ceremony also marks the successful collaboration between ALAM and shipping organisations from Timor-Leste and Australia. Ten students from Timor-Leste were given the opportunity to pursue their studies at ALAM. A total of five students were sponsored by Deutsche Gesellschaft für Internationale Zusammenarbeit (GIZ) – a government-to-government initiative from Germany which assists students from Timor-Leste to acquire specialised industry skills. A further five were sponsored by both Konnekto and Tidewater. Konnekto provides manpower to Tidewater, an oil and gas corporation in Australia
Building on the successful collaboration with Konnekto, Tidewater and GIZ, ALAM hopes to realise further business opportunities with shipping, governmental and educational organisations from across the globe.
Recognising those companies who sponsored today’s graduates, David Fredrick said: “We thank our sponsors for their continuous support of our students and your trust in our training capabilities. Your support gives them an opportunity to create a better life for themselves and their families and helps realize their dreams of pursuing a career at sea. “
The convocation ceremony, which took place at the Seri Pacific Hotel Kuala Lumpur, was joined by family members of the graduates and they were treated to lunch at the hotel after the students received their certificates.
During the prize giving session, four students received the awards for “Best Rating”. Mohd Ammar Bin Abdul Hamid Sagas was awarded Best Student for the Deck Programme and Julio Da Costa De Jesus of Timor-Leste was awarded Best Student for the Engine Programme. Amir Hamzah Bin Mazlan was Runner-Up for the Best Overall Rating Award, while Vijayabaskar Natarajan was named the Best Overall Rating; a prestigious honour for his overall academic achievement and extra-curricular excellence during his six-month stay at ALAM.