HONG KONG's Orient Overseas (International) Ltd, whose principal holding is OOCL, posted a 4.7 per cent year-on-year profit increase to US$284 million in 2015, drawn on revenues of $5.95 billion, which fell 8.7 per cent. 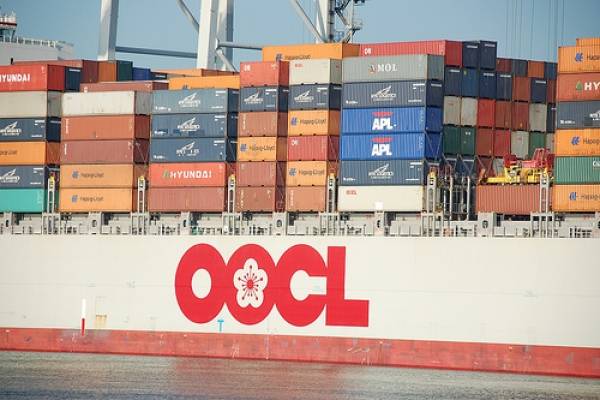 07 March 2016 - 23:02
OOIL profit up 4.7pc, revenue down 8.7pc as boxes earn 10pc less
HONG KONG's Orient Overseas (International) Ltd, whose principal holding is OOCL, posted a 4.7 per cent year-on-year profit increase to US$284 million in 2015, drawn on revenues of $5.95 billion, which fell 8.7 per cent.
"OOCL's liftings were essentially flat, with a drop per TEU of 10 per cent," said OOIL chairman CC Tung.
"At the start of 2015, conditions were almost without exception positive with substantially lower fuel costs and gains from the US recovery," said Mr Tung.
"Unfortunately, the fall in oil prices led to a reduction in energy-related capital expenditure. Trade growth was limited, and the Fed implemented a start to the normalisation of interest rates," he said.
The second half of the year saw retail sales stagnating, reducing imports from Asia, Mr Tung said.
This was aggravated by the worsening imbalance in supply and demand, driven by large amounts of new tonnage being introduced at a time of low volume growth, he said.
Capacity was taken out of the market in response, and having witnessed a substantial fall in rates, lines were forced to surrender all - if not more - of the benefits of lower fuel prices to their customers, said Mr Tung.
During the year of 2015, the group took delivery of four SX class 8,888-TEU vessels from Hudong-Zhonghua Shipbuilding (Group) Co in China.
They are also the last four vessels for the series. On March 31, 2015, orders for six 20,000-TEU vessels were placed with Samsung Heavy Industries for delivery in 2017.
To optimise fleet utilisation, two 11-year old 8,063-TEU SX-class vessels were sold and chartered back for a three-year period during the year.
As to the future, Mr Tung said: "Scale will continue to be a key driver of sustainability in the industry. OOCL achieves scale through having the right fleet, with modern and fuel efficient vessels built to the right size and specifications, driving unit cost efficiency even at today's lower fuel prices.
"We are delighted with the better-than-expected efficiency gains achieved through our 13,208-TEU vessels replacing smaller vessels on certain routes, and look forward to enhancing these benefits of scale further with our larger vessels, as they enter into service in 2017," said Mr Tung.
"OOCL has participated in alliances, in one form or another, for decades. We continue to believe that alliance structures are an important means of achieving scale and enhancing product quality," he said.
"OOCL Logistics continues to grow its volumes and profitability, and we remain committed to building up our activities in this sphere.
"As for 2016, the first quarter has so far been characterised by great uncertainty. The IMF forecast for global economic growth has been reduced. The US economic recovery seems to be solid, but not spectacular, and continues to be influenced by external factors.
"Both Japanese and European growth levels are low, with few predicting with any confidence that the corner will be turned in 2016. Chinese growth has continued to slow, presenting challenges to emerging market and commodity economies.
"OOCL has a long track record of outperforming the market, in both up and down cycles. Through our continued efforts in yield and cost management, as well in operational efficiency and customer focus, the group continues to be an industry leader," said Mr Tung.
This news 3473 hits received.