PUMPING oil from the stricken 3,300 TEU Rena on the Astrolabe Reef off the New Zealand coast was to resume on Thursday this week after being abandoned due to bad weather. 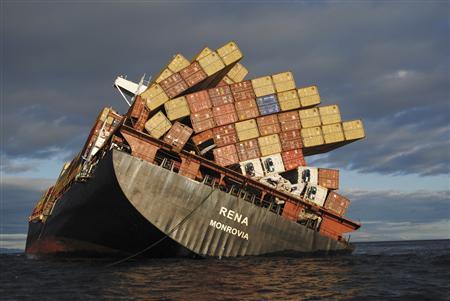 Containers on the stern deck of the 47,230 tonne Liberian-flagged Rena hang precariously, about 12 nautical miles (22 km) from Tauranga, on the east coast of New Zealand's North Island October 20, 2011. The recovery of fuel oil from a stricken container ship grounded off New Zealand resumed on Thursday as salvage teams worked to minimise the damage in the country's worst environmental disaster in decades. Two days of strong winds and high seas had prevented the pumping of oil from the Rena, which has been stuck for more than two weeks on the Astrolabe Reef.
PUMPING oil from the stricken 3,300 TEU Rena on the Astrolabe Reef off the New Zealand coast was to resume on Thursday this week after being abandoned due to bad weather.

Ninety tonnes of fuel has been pumped from the ship, leaving 1,300 tonnes of fuel still on board, reported London's Containerisation International. There are growing fears that the ship will break up, causing a catastrophic oil spill.

Eight-eight containers have fallen into the ocean since running aground on the Astrolabe Reef on October 5.

The salvage adviser for Maritime New Zealand Bruce Andersen told Reuters: "They have sensors on board the vessel now, which are saying that it's got about half a degree of rotation and about a degree's lift at the stern."

Thousands of volunteers, soldiers and specialist teams have taken to cleaning the polluted beaches. Oil covered debris from broken containers has been scattered as far as 250 kilometres east of Tauranga.

Owned by Costamare and chartered by MSC, the vessel's Filipino captain and navigational officer have been charged with negligence. The charge carries a maximum penalty of NZ$10,000 (US$7,900) or 12 months in prison.
This news 30667 hits received.
ANASAYFAYA DÖNMEK İÇİN TIKLAYINIZ
These news may also interest you
Two large ships "Benitamou" and "BC Vanessa" Collided at the Dardanelles approaches
KINAY CELEBRATED ITS 75th ANNIVERSARY
3 sailors died on Turkish operated ship 'Global Lake'!
Horrible accident in the Strait of Malacca: Container ship collides with bulker!
Last News