The "Parida" was adrift in the Moray Firth after losing engine power following a fire on Oct 7, 2014 around 8 p.m. Weather conditions were pretty rough. 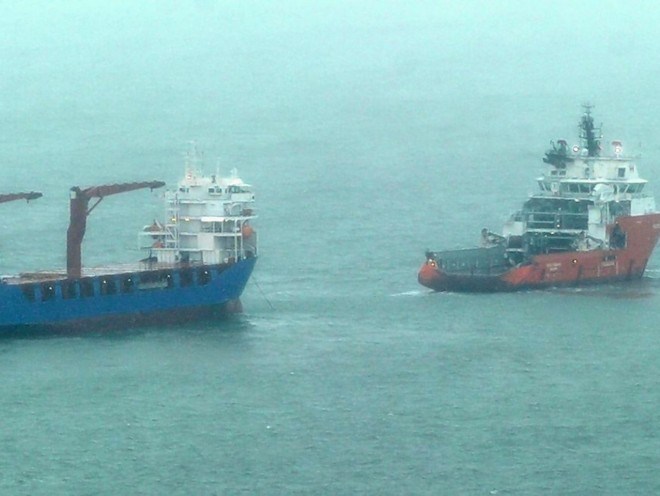 08 October 2014 - 17:15
Nuclear waste carrier "Parida" on fire
The was adrift in the Moray Firth after losing engine power following a fire on Oct 7, 2014 around 8 p.m. Weather conditions were pretty rough. The ship with a crew of 15 was carrying a cargo of radioactive concrete waste coming from from Scrabster to Antwerp when a fire broke out in one of her funnels. The substance is said to have come from Dounreay, in Thurso.
The crew immediately switched off the engines, leaving the vessel drifting around 20 miles south east of Wick as attempts were made to restore power. The ship was drifting roughly south west, but the crew dropped the anchor in an attempt to stop the ship.
All 52 people aboard the Beatrice rigs which were seven miles away have been lifted off by helicopters and evacuated to RAF Lossiemouth as a precaution while the vessel continued to drift and the risk of an allision could not be ruled out.
Shetland Coastguard was alerted to the incident and sent their emergency towing vessel from Orkney to the scene, but before its arrival the "Parida"'s operators arranged for a commercial tow by the "Pacific Champion" (IMO: 9455129), at 03.30 a.m. UTC on Oct 8. In the morning the convoy was in the Moray Firth 23 miles south of Wick, proceeding southwards to Inverness at a speed of 6.5 knots.
There were no reports of any injuries. As of midday the "Parida" was anchored about a mile south-east of the Sutors of Cromarty near Inverness. The vessel was using one of its anchor points at the location while it was checked over.
It would not be entering the Cromarty Firth itself or docking at Invergordon. The "Parida" was anchored safely within the Port limits, out with the North and South Sutors of the Cromarty Firth, whilst it undertakes necessary repairs. The Port of Cromarty Firth was working closely with the Maritime Coastguard Agency and Police Scotland throughout the process.
The Beatrice platorm remained unmanned for the time being. A Scottish Government Resilience meeting has taken place with key partners including Police Scotland and the Maritime Coastguard Agency, which is coordinating an operation to stabilise the vessel and ensure it is safely recovered to harbour. The Ministers have been briefed and Scottish Government officials were engaging closely with the Nuclear Decommissioning Authority, the UK Government and key partners to ensure appropriate response arrangements were in place.
This news 9383 hits received.