Swells around the Astrolabe Reef are continuing to prevent salvors from diving on the wreck to assess the damage caused through Rena’s break-up and partial sinking of the stern, Maritime New Zealand (MNZ) says. 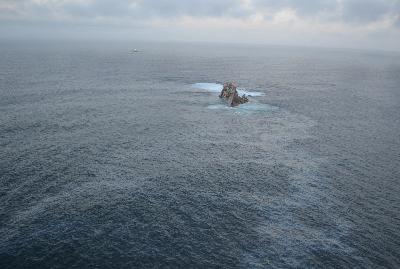 Swells around the Astrolabe Reef are continuing to prevent salvors from diving on the wreck to assess the damage caused through Rena’s break-up and partial sinking of the stern, Maritime New Zealand (MNZ) says.

MNZ Salvage Unit Manager David Billington said the current swell was around 2m, with a maximum wave height of 4m. The sea state was expected to peak tomorrow and to subside over the weekend.

“The breaking up of the wreck has exposed a lot of jagged steel and the wave surges are causing containers and debris to shift around. It is certainly not safe for divers to attempt to dive on the wreck in the current conditions,” Mr Billington said.

Yesterday, Svitzer had dropped rigging technicians onto the front section of the wreck, still firm on the Astrolabe Reef, to secure containers on the bow, Mr Billington said.

They would return today to check on the rigging to ensure the containers remained as secure as possible.

Svitzer naval architects were developing plans for container removal from the front section.

“The Smit Borneo is ready to go back out to the wreck when the weather conditions allow. Svitzer continues to assess how the barge can get access to the bow section.”

The clean-up operation is continuing around the Bay of Plenty today, with Braemar Howells container and debris recovery teams working in several different areas both on water and on shore.

Mr Billington said considerable progress had been made at Waihi Beach with a significant amount of debris moved from the beach yesterday.

A total of 30 containers had been identified ashore in a number of locations.

More than 10 vessels undertaking container and debris recovery would be action in total today – including two specialised barges with excavator arms to tackle floating debris.

Braemar aimed to begin removing 11 containers beached on Matakana Island​ today. They will be using both shoreline recovery – transferring the containers by road transport using the vehicle ferry – and on-water recovery by hauling some back into the sea to be lifted onto barges.

“Matakana Island is one of the areas that has borne the brunt of the debris washing ashore – there is a large scale operation there that will continue for some time,” Mr Billington said.

Braemar Howells teams were also scouring beaches from the Mount to Papamoa where small patches of debris had been located. Operations were also underway on Mōtītī Island and Waihi.

National On Scene Commander Alex van Wijngaarden said a heavy metallic sheen had been observed coming from the wreck this morning.

“The sheen is about 4km long and between 10-60m wide. It is part of a larger, lighter sheen that is stretching about 10km from the wreck.”

Captain van Wijngaarden said sheen was drifting down the eastern side of Mōtītī Island but observers noted it did not appear to be reaching the island. Current trajectory modelling predicted the oil was likely to reach Pukehina Beach, and east of there, overnight.

“We have had unconfirmed reports of a small amount of oil stranding at Pukehina. We have sent a shoreline clean-up assessment team down to follow up on those reports and we have response teams ready to clean any oil they may find,” Captain van Wijngaarden said.

“We have about 60 oil spill responders in the field today, cleaning at the Mount and on Matakana Island. We also continue to get a significant amount of support from iwi volunteer groups, who are also doing a fantastic job.”

Wildlife teams were out between the Mount and Pukehina today checking for affected wildlife. Seven live little blue penguins and 31 dead birds of different species have been picked up this week. The live penguins are being stabilised at the Te Maunga oiled wildlife facility.

Boom maintenance teams were going to check on booms put up at Maketū, Little Waihi and Waitahanui yesterday – they would also be putting signage up to caution people using the beach.

Surf lifesavers had assessed all the beaches this morning – beach goers are encouraged to swim between the flags and seek guidance from their local surf lifesaving club if they are concerned about debris in the water.