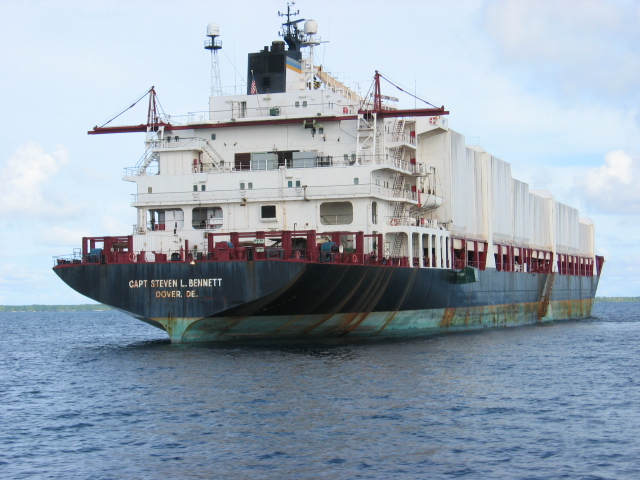 MSC transported the cargo to Thailand for the exercise – a large-scale multinational exercise held each year throughout the Kingdom of Thailand – from ports on the Japanese island of Okinawa. MSC routinely charters commercial cargo ships to move U.S. military cargo from port to port.

“MSC is often the first in and last out,” said MSC Expeditionary Port Unit (EPU) 115 executive officer Cmdr. Ross Lee, deployed to Okinawa for the exercise. “We bring in cargo and supplies which enables our forces to operate at their peak capacity.”

EPUs are MSC’s highly mobile units which can quickly deploy to a contingency operation, establish port operations and manage the arrivals and departures of cargo ships in port.

Starting Feb. 11, more than 13,000 military personnel from the Thailand Singapore, Japan, Republic of Korea, Indonesia, Malaysia, and the U.S. will fan out across Thailand to participate in the 10-day Cobra Gold exercise, which includes live-fire training, computer-simulated scenarios, and humanitarian and civic assistance programs. This year, military members from Burma are observing the exercise for the first time.

Personnel loaded 495 pieces of cargo, including Humvees, heavy trucks, crane trucks, trailers and tracked vehicles. After a short sail to Tengan pier, the remaining cargo, comprising shipping containers and some break-bulk cargo, was loaded aboard. All cargo was loaded by the ship’s three heavy-lift cranes.

With all cargo safely stowed, Bennett began the 1,700-nautical mile journey to Gulf of Thailand Jan. 23.

“Building relationships is a key goal of our Reserve personnel,” said operational support officer Charlie Brown, based at MSC Far East headquarters in Singapore. “We must work closely with our partners and host nation personnel in order to be successful.”

In Thailand, Sailors from the Bronx, N.Y.-based EPU 102 manned a highly specialized Mobile Sealift Operation Command Center, a portable facility that provides critical communications equipment for managing port operations even when a port infrastructure is damaged or destroyed.

From Chuk Sa Met, Marines are deploying cargo to the field for the live portion of Cobra Gold.

Drewry: Overcapacity to Ease Gradually after 2013