Expectations of new investment were maintained over the three-month period, but the prospect for higher freight rates softened in the tanker and dry bulk sectors.

Expectations of new investment were maintained over the three-month period, but the prospect for higher freight rates softened in the tanker and dry bulk sectors.

Uncertainty over the likely effect of an increase in private equity funding, and the consequent potential impact on tonnage supply, meanwhile dominated the thoughts of respondents to the survey.

In May 2014, the average confidence level expressed by respondents in the markets in which they operate was 6.3 on a scale of 1 (low) to 10 (high), compared to the 6.5 recorded in February 2014, which was the highest figure since the 6.8 recorded when the survey was launched in May 2008.

Ship managers (up from 6.4 in the previous survey to 6.5 this time) were the only category of main respondent to report an increase in confidence. Owners (down from 6.6 to 6.1), charterers (down from 6.5 to 6.1) and brokers (down from 6.4 to 6.0) were less confident than they were three months previously.

Despite the small overall decline in confidence levels, a number of respondents to the survey remained upbeat.

“Confidence is lower today than at the start of the year, but still reasonably optimistic going forward,” said one respondent. “Some believe we are sailing out of the doldrums, while others believe we will never get out. Interesting times!” Another noted, “The market has improved slightly, but certainly not enough to start drinking champagne. The next few years will be difficult, and maybe the real recovery will be too little and come too late for some owners.”

Elsewhere it was noted, “The market has held up for longer in 2014 than it has in the past few years, but one can sense that it is slowing down now. Hopefully, though, we are now seeing the results of more vessels being scrapped, and rates should be more robust and won’t tumble over the quieter summer months.” 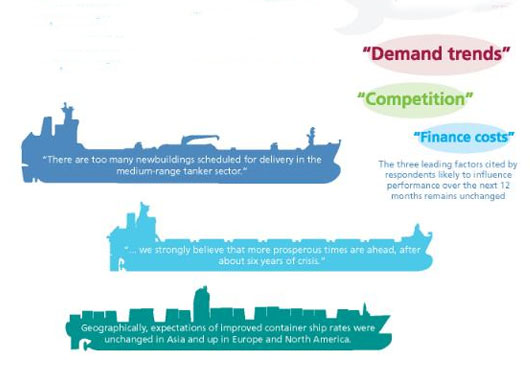 Moore Stephens shipping partner, Richard Greiner, says, “The small dip in confidence revealed by the latest survey is a disappointment. But it has to be viewed in context. Confidence is still at its second-highest level for four years, and the number of respondents planning to make a major investment over the next twelve months is as high as it has been at any time since August 2010. It is difficult to think of another industry, similarly exposed to political, commercial, economic and environmental pressures, which has retained the confidence of its customers and investors to the same degree.

“Ironically, it is the willingness of investors – and new investors, at that – to put their money into shipping which may lie behind the recent small dip in confidence.

Private equity funding dominated the comments of respondents to an extent seldom seen in connection with any other issue during the six-year life of the survey to date. Many see the growth of private equity finance in shipping as a threat to longer-term viability.

It is true that this type of funding is likely to be short-term by shipping industry standards, and shipping is an industry which best rewards long-term investors. But, in the absence of sufficient bank funding of the type which has been the traditional mainstay of shipping finance over the years, other options are required to bridge the gap.

“Shipping is a recovering market which has proved its resilience. This is bound to attract interest from new, outside investors. That will not sit well with those who believe that shipping should be financed by shipping people and their banks.

But there have already been a number of recent examples of successful shipping companies being formed by private equity investors at a low point in the shipping cycle. It may be that the recent easing of asset prices will be seen by private equity as an opportunity for further investment in shipping.

“The fact is that shipping needs new investment, and that can no longer be provided solely by the banks. Those who fear the repercussions of going into business with investors who don’t know the shipping industry should seek professional financial advice before making a commitment. Private equity investors who want to know more about shipping before taking the plunge, meanwhile, should do the same.

“Elsewhere, the survey revealed some familiar areas of concern, not least in connection with overtonnaging, and the effect that the entry into the market of large numbers of newbuildings will have on freight rates. Another recurring area of concern involves the cost of achieving regulatory compliance, in particular with the ballast water management convention, and of meeting the escalating cost of daily operation.

These are the bread-and-butter issues of shipping, and bread and butter is expensive in today’s industry. They are also the issues that putative private equity investors will have to factor into their decision-making.

“Some people are already calling this period in the shipping cycle the recovery that never arrived. This works well as a sound-bite, but takes no account of the improved levels of confidence we have seen recently.

Shipping industry confidence today is vastly improved compared to where it was five years ago. As one of our respondents noted, it may not yet to be time to break out the champagne. But neither is it time to subsist solely on beer.”

Violent murder on board of MSC mega container ship!

LNG-Powered Ships to Get 30% Off Port Tariff at Gothenburg