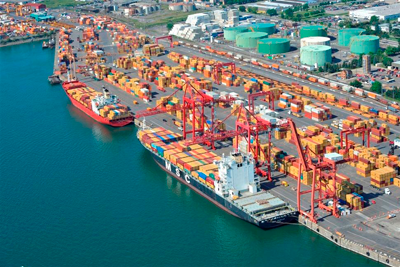 THE Port of Montreal expects 2018 to be another record year for cargo volumes as the Canadian free trade agreement with Europe begins to bear fruit.

Canada's second largest port, after Vancouver, expects volume to rise four per cent in 2018 following a record seven per cent year-on-year increase in 2017 to 38 million tonnes.

Last year marked the first full year of operations for a new container terminal that will eventually handle 600,000 TEU per year. The port is seeking approval for another terminal that would have an annual container throughput capacity of 1.15 million TEU starting from 2021 or 2022.

Ms Vachon said US President Donald Trump's threat to exit the North American Free Trade Agreement is prompting transporters to look at developing other markets, notably Europe because of the new trade deal.

'It will be gradual but positive for us,' she said in regards to the European trade agreement.

So far the extreme weather conditions that have gripped the continent has not forced the closure of the Port of Montreal.

'For the people who work outside it's difficult, but with the coast guard who do a very good job to break the ice, for the moment everything is okay for the Port of Montreal,' said Rakesh Kumar, captain of the 2,808-TEU Ottawa Express, owned by Hong Kong's Anglo Eastern Ship Management. Capt Kumar was this year's winner of the Gold Headed Cane, which goes to the master of the first ship through the ice into Montreal harbour in the New Year.

The same can't be said for the St Lawrence Seaway where ice on the US side has caused five ocean vessels to remain in the Cornwall-to-Kingston area and will force the waterway to close a few days later than normal for the winter season.

'Once we see those ships complete that portion of their transit they should be clear to finish the Canadian section and exit the St Lawrence Seaway,' said Seaway spokesman Andrew Bogora.

Although the final tally for Seaway traffic is expected to be released next week, Mr Bogora expects the momentum of the year was maintained in December.

As of November, cargo traffic in the first 11 months of the year was up 8.5 per cent. The growth was attributed to a 35 per cent increase in iron ore tonnes destined for Asia. General cargo was up 28 per cent and dry bulk 12 per cent. Grain was down 10.5 per cent.