US PACIFIC carrier Matson Inc has posted an 11 per cent decline in third quarter net profit year on year to US$17.2 million, drawn on revenues of $415 million, up 3.3 per cent. 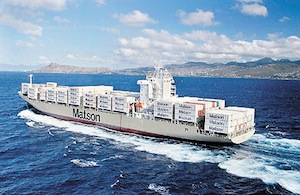 US PACIFIC carrier Matson Inc has posted an 11 per cent decline in third quarter net profit year on year to US$17.2 million, drawn on revenues of $415 million, up 3.3 per cent.

"Third quarter results were mixed. After strong volume growth in the first half, we saw a lull in container volume in our core Hawaii market," said Matson president and CEO Matt Cox.

"Overall, our ocean transport and logistics operations performed well. We are encouraged by the continuing strong demand for our premium service out of China and we believe performance in Guam will remain steady," Mr Cox said.

But unfavourable costs had to be borne, he said, listing higher transition costs at SSAT's new Oakland terminal, an adverse arbitration ruling related to previously co-owned Guam terminal as well as expenses related to the molasses spill in Honolulu Harbour.

"No legal claims have made, and state agencies have not yet presented claims," he said. "At this early stage, the company is not able to estimate the costs, penalties, damages or expenses related to the incident."

Matson said it remains confident in the long-term prospect for multi-year growth in Hawaii. "We have entered into a contract to build two, Aloha Class 3,600 TEU ships for dedicated service to the Hawaii market beginning in 2018," the Matson statement said.

Matson, running a nine-ship fleet, also announced its decision to go into the debt market to raise $100 million in 30-year, 4.35 per cent senior unsecured notes in early 2014.

The Egyptian court did not allow Ever Given to leave!
Related News
Most Read News
Recent Comments
Hyundai Merchant Marine launches inaugural service to West Africa