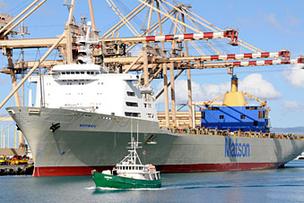 The Jones Act carrier also posted a 280 per cent fourth quarter net profit increase to $27.8 million, drawn on revenues of $443.5 million, which rose 7.9 per cent year on year.

Full year 2013 results were negatively impacted by the litigation charge, referring to a $2.1 million fine and other expenses related to the molasses spill in Honolulu Harbour in September 2013.

"Additionally, Matson incurred $4.6 million in legal fees, penalties, and other expenses in 2014 related to the molasses incident. At this stage, the company is not able to estimate future costs related to the incident," said the Matson statement.

"The sharp decline in bunker fuel prices had a positive timing impact on our results, as fuel surcharge collections outpaced fuel expenditures late in the third quarter and continued into the fourth quarter," said Matson president and CEO Matt Cox.

Looking to 2015, he saw a year of opportunity and challenge. "We are excited to enter the Alaska trade once we close our pending transaction with Horizon Lines and also expect our Logistics group to improve on a good 2014 result," he said.

"However, new vessel capacity is expected to enter our core Hawaii market in the first half of the year and ongoing port congestion on the US west coast is testing our cargo handling capabilities.

"Overall, we expect to deliver 2015 operating results that are modestly higher than the solid results posted in 2014. Further, we expect our core business platforms to continue to generate significant cash flow to comfortably sustain our dividend.

"Our balance sheet remains in good shape, which will provide the foundation for our pending Alaska acquisition and the funding of the construction of our new Aloha-class vessels," said Mr Cox.