The melting of sea ice presents opportunities for international marine transportation networks in the Arctic, at least during the summer months. 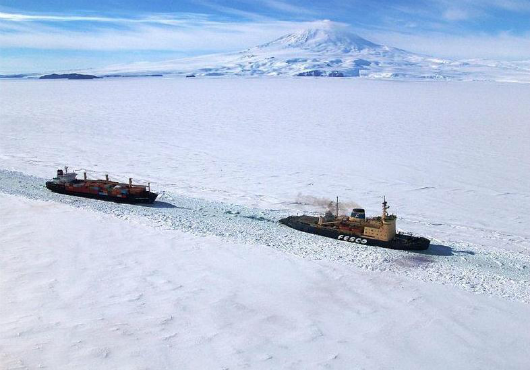 25 August 2014 - 21:08
The melting of sea ice presents opportunities for international marine transportation networks in the Arctic, at least during the summer months. Recent discoveries of oil and the potential financial and time savings are making the Arctic routes more appealing to the shipping industry. Two viable Arctic sea routes exist, enabling ships to move between the Atlantic and Pacific Oceans, thus cutting the distance between East Asia and Western Europe.

The routes offer alternatives to the Panama and Suez canals, but they are not without risk. Extreme climate and weather conditions create unique hazards, including floating ice, thick fog, and violent storms.

Despite new safety features, vessels remain vulnerable to ice damage, machinery breakdown, and more. The harsh environment also creates challenges for crews, few of which have been trained for or have experience in such conditions, according to insurance broker and risk adviser Marsh.

The rapid development of fledgling Arctic shipping routes is dependent upon improvements in the capabilities of vessels navigating them and the upgrade and expansion of the support facilities in the region.The international shipping industry is keen to start maximizing the opportunities afforded by Arctic navigation. Yet the marine insurance industry — essential to the commercial viability of Arctic transit — holds a host of safety and navigational concerns, which may limit and/or prohibit the possibility of rapid growth in Arctic transit for the foreseeable future.

Marcus Baker, Chairman of Marsh’s Global Marine Practice,said: “While marine insurers are largely supportive of the development of Arctic shipping routes, they are extremely wary about incurring large, high profile losses while the market is still in its infancy.

Currently, the majority of ships and their crews lack adequate experience, are unprepared, and the support facilities are not yet in place for full-scale commercial voyages through the Northern Sea Route and the Northwest Passage. In the absence of hard facts, it is extremely difficult for marine insurers to price an insurable risk, or even to agree to cover a voyage in the first place.”

According to Marsh, in considering the provision of marine hull and protection and indemnity (P&I) insurance, insurers and P&I clubs require more detailed information about vessel capabilities and available salvage services, with wreck removal, pollution risks and crew health and safety of major concern to underwriters.

Steve Harris, a senior vice president in Marsh’s Global Marine Practice, said: “The majority of transits that have already taken place in the Arctic were one-off voyages that have been permitted as extraordinary ventures, and were usually government-backed or sponsored.

Risk presentation is critical. Only if shipping firms can present insurers with the information they require, and all parties concerned take a collaborative approach to calculating these risks, will insurance capacity be readily available to support the growth in Arctic navigation.”