The Royal Malaysian Navy said its commandos injured three pirates in a gunbattle and rescued the 23 crew members of the Malaysian-flagged MT Bunga Laurel early Friday, less than two hours after the assailants stormed the vessel with pistols and assault rifles. 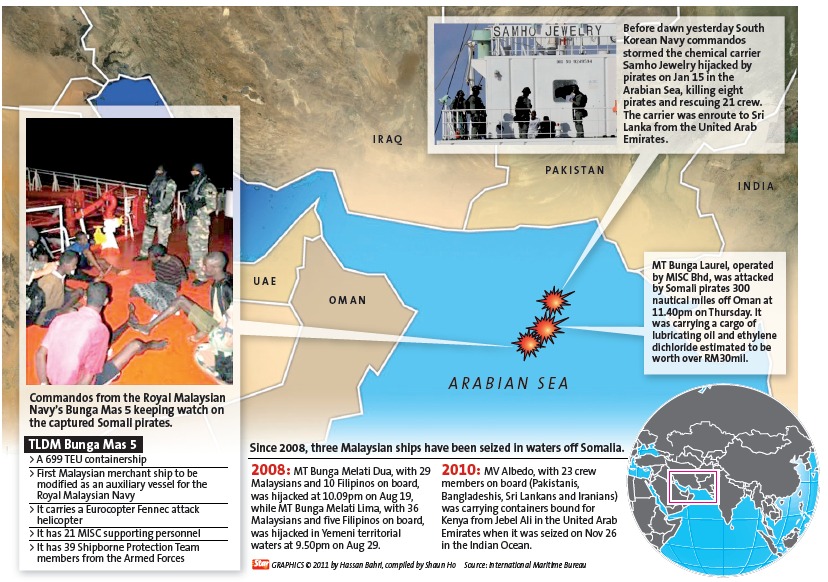 The Royal Malaysian Navy said its commandos injured three pirates in a gunbattle and rescued the 23 crew members of the Malaysian-flagged MT Bunga Laurel early Friday, less than two hours after the assailants stormed the vessel with pistols and assault rifles.

The navy sent a ship and a helicopter, which were then 14 miles (22 kilometres) from the Bunga Laurel, after crew members locked themselves in a safe room and activated a distress call, it said in a statement late Friday.

Elite security forces managed to board the ship and overpower the pirates after an exchange of gunfire, the statement said. No one among the rescue team or Bunga Laurel's crew was injured. 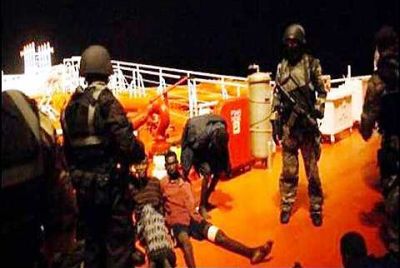 Under control: The commandos watching over the Somali pirates.(Photo courtesy of Malaysian Star)

Malaysian Prime Minister Najib Razak said he was informed that seven pirates were captured. Authorities were considering whether they should be brought to Malaysia to face trial for the hijack attempt, Najib told a news conference.

"I am proud of our (navy), which acted with full efficiency and demonstrated courage," Najib said.

The naval ship was in the Gulf of Aden to escort vessels with Malaysian interests. The attack occurred only two hours after the ship had left the Bunga Laurel after accompanying it to what was considered relatively safe waters in the Gulf of Aden, about 300 miles (500 kilometres) east off the coast of Oman, the navy statement said.

The navy did not provide details of the crew members' nationalities. Representatives of the Malaysian International Shipping Corporation, which was operating the Bunga Laurel, could not immediately be reached.

Other countries' special forces have also launched raids to save ships boarded by Somali pirates within hours of the attacks in recent months, after being assured the crew was locked in safe rooms, commonly referred to as "citadels."

In another successful but riskier rescue Friday, South Korean special forces stormed a freighter in the Arabian Sea that had been hijacked a week earlier. They freed 21 crew members and killed eight Somali pirates.