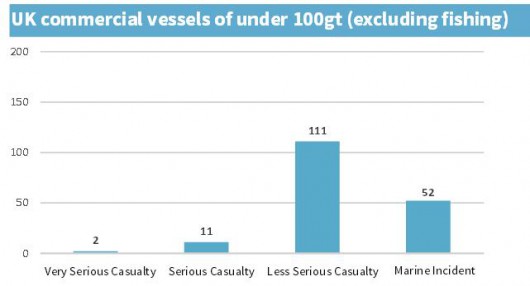 The investigations commenced and the reports published by the MAIB during 2013 have been diverse and have covered all sectors of the maritime industry.

Some 70 of these accidents involved only non-commercial vessels, 420 were occupational accidents that did not involve any actual or potential casualty to a vessel.

There were 842 accidents involving 927 vessels that involved actual or potential casualties to ships.

Accidents involving fishing vessels accounted for approximately a third of these, with the failure to wear personal flotation devices, inadequate appreciation of stability issues and an absence of general emergency preparedness contributing to avoidable losses, deaths and injuries. 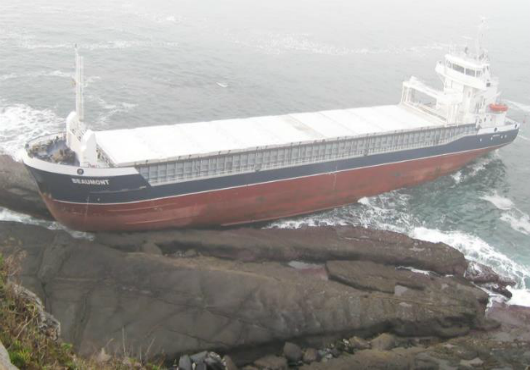 Eighteen fishing vessels were lost in 2013 compared with 9 in 2012. Although the increase is disappointing it compares favourably with the 10 year statistical average of 20 per year. 15 (83%) of the losses in 2013 were in the small under 15m sector.

Four fishermen lost their lives, which is a historical low.

Among growing concerns are the fatigue caused accidents of ships with only two watchkeepers onboard, as accidents continue to occur because sole watchkeepers on the bridges of the vessels concerned are severely fatigued.

“Such vessels are, in reality, akin to unguided missiles and it is only a matter of time before there is a major accident involving loss of life or pollution,” MAIB Steve Clinch Chief Inspector of Marine Accidents said.

MAIB identified these issues in 2004 following publication of its Bridge Watchkeeping Safety Study when it was recommended that international action be taken to improve the minimum safe manning levels for ships. Nearly 10 years on, the situation remains unchanged.

For the fourth successive year, there have been no losses of UK registered ships of 100gt and over. The number of accidents, as a ratio of the size of the fleet, was 88/1000 vessels compared with the statistical average over the last 10 years of 93/1000 vessels in 2012.

One death of a merchant vessel crew member was reported. This is the lowest reported number since the formation of the MAIB in 1989.

The statistical average over the last 10 years is 4.4 deaths per year.

The report provides more details on the type, location and causal factors of death and injuries suffered on merchant and fishing vessels. The data reveals some interesting facts:

Most injuries to merchant vessel crew occurred in vehicle cargo spaces, when climbing or descending stairs or ladders in areas away from the ship’s accommodation, or in the engine room (13, 12 and 11 crew respectively);Most injuries to fishing vessel crew (42.4%) involved injury to upper limbs;There were 9 cases of traumatic amputation out of a total of 33 fishermen injured.
This news 12369 hits received.