Maersk's Safmarine Meru in collision with Northern Jasper off Ningbo 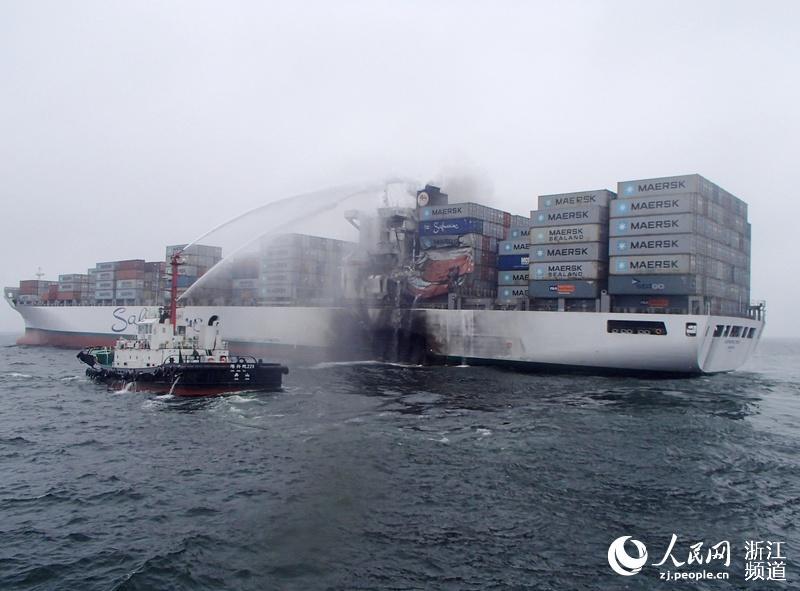 Maersk's 4,650-TEU ship in collision with 8,400-TEUer off Ningbo
MAERSK's 4,650-TEU Hong Kong-flagged Safmarine Meru has collided with the Liberian-flagged 8,400-TEU Northern Jasper, owned by Hamburg-based Norddeutsche Reederei NAV some 120 nautical miles east of Ningbo.
The collision caused severe damage to the Safmarine Meru, which was on its way from Qingdao, said a Maersk statement, adding that when fire broke out, the Safmarine Meru's 22-man crew abandoned ship. No one was hurt.
"We are very relieved that our crew are safe and have not suffered any serious injuries. The safety of our people, at sea and on shore, is paramount to us," said Maersk's ship management chief Palle Brodsgaard Laursen.
Safmarine Meru is afloat and anchored. Firefighting was initiated and while there is no visible fire, there is smoke and firefighting continues. The Chinese authorities are on the scene.
The latest situation, as reported by Mikhael Voytenko of Maritime Bulletin, is as follows:
According to latest available information, SAFMARINE MERU suffered breach portside, and fire in containers in fore section. 11 containers on fire, or near fire, contain chemicals and other hazardous materials. As of 1900 Beijing time May 8, firefighting, which started at around 1130, was still on. No flames were visible, but fire was still on. Both vessels are anchored somewhere off Zhoushan, both AIS seemingly off. NORTHERN JASPER assumedly suffered serious damages, too, because her crew was to be evacuated, or has been already evacuated. A full-scale salvage operation under way, deploying a number of CG rescue ships, tugs and firefighting and salvage teams. Official statements didn’t reveal much, which is indicator of the seriousness of the situation. Previous news: Boxships NORTHERN JASPER vs. SAFMARINE MERU, 22 crew evacuated, fire on board Container ships NORTHERN JASPER and SAFMARINE MERU collided at around noon Beijing Time May 8 in Yellow sea some 15 nm off Shandong province coast. Reportedly fire started on board of SAFMARINE MERU, 22 crew evacuated. Chinese salvage teams and ships are fighting fire. No information yet on NORTHERN JASPER damages, understood to be slight.
NORTHERN JASPER was en route from Zhoushan to Yangshan, SAFMARINE MERU was en route from Qingdao to Ningbo.
Container ship NORTHERN JASPER, IMO 9466960, dwt 108804, capacity 8400 TEU, built 2009, flag Liberia, manager NORDDEUTSCHE REEDEREI SCHULDT, Germany.
Container ship SAFMARINE MERU, IMO 9311696, dwt 61392, capacity 4154 TEU, built 2006, flag Hong Kong, manager MOLLER-MAERSK A/S.