JAPANESE shipping giant "K" Line posted a 255 per cent year-on-year net profit decline to JYN9.2 billion (US$76.9 million) in the last nine months of 2015, drawn on revenues of JYN977.7 billion, down three per cent. 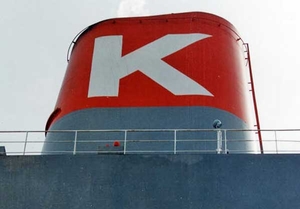 JAPANESE shipping giant "K" Line posted a 255 per cent year-on-year net profit decline to JYN9.2 billion (US$76.9 million) in the last nine months of 2015, drawn on revenues of JYN977.7 billion, down three per cent.

While noting some improvement in the economies in the US and Europe, though times worsened in the emerging economies of Russia and South America.

"The slowdown in the Chinese economy became clear, with ongoing reduction of excess investment and an adjustment of surplus facilities," said the "K" Line statement.

The Japanese economy continued its recovery trend, with an upturn in personal incomes reflecting a modest improvement in the employment situation, it said.

But the trend was too weak to boost consumer spending or capital expenditure.In the business environment for the shipping industry, market conditions recovered in the oil tanker business amid a fall in fuel oil prices and the yen's continued depreciation, due to expansion in stockpiles and transport demand associated with the drop in crude oil prices.

Nevertheless, in the containership business, freight rate market slumped as the gap between tonnage supply and demand widened due to stagnating cargo movement combined with the continued launches of newly built large-sized containerships.

During the nine-month period, cargo volume loaded on the Asia-North America service for round-trip voyages overall recorded an increase of two per cent year on year, supported by the firm undertone of the US economy.

But in the Asia-Europe, intra-Asia, and North-South services, cargo volumes declined more than 10 per cent as sailings were reduced and services rationalised in response to stalled cargo movements.

The freight rate market fell in the Asia-North America service from the third quarter due to deterioration in the supply-demand balance. The market also slumped in the Asia-Europe and North-South services due to a decline in cargo movements.

The average freight rate for the Group across all routes dropped sharply from the same period of the previous fiscal year.

The group continued working to improve profitability and reduce costs by four rationalising services on the North-South and intra-Asia services in response to a decline in demand, reducing surplus space by reducing sailings on the Asia-Europe and Asia-US services, and taking other detailed operational measures.