JAPAN's Big Three carriers - NYK, MOL and "K" Line - all posted improved results in their financial first quarter ending June 30 ahead of their integration into the Ocean Network Express (ONE) next April. 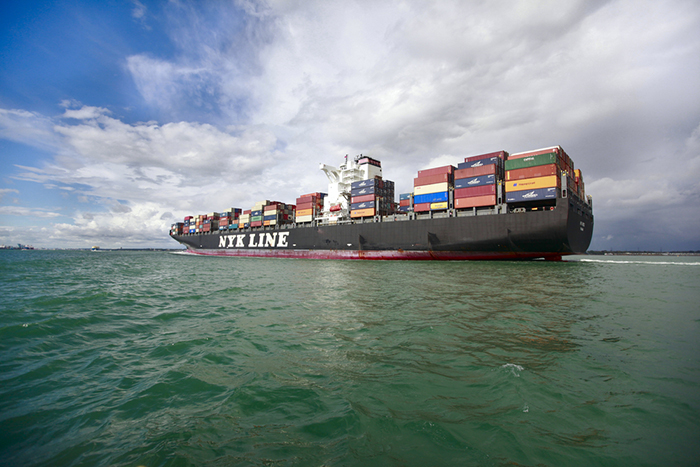 MOL, which like "K" Line will have 31 per cent of ONE, also saw its turnover surge, by 22.4 per cent on the same quarter of the previous year, to JPY180.2 billion, but it was still unable to convert this into profit, albeit the loss of JPY6.2 billion improved on the JPY11.6 billion deficit previously.

Meanwhile, the turnover for "K" Line's container business jumped 20.4 per cent in the quarter, compared with the previous year, to JPY147billion propelling the carrier back into the black, with a profit of JPY6.1 billion for the quarter, against a loss of JPY12.3billion suffered the year before.

It added that other routes had "also mostly recovered", which it said included tradelanes in Central and South America, but a tonnage increase on the transpacific routes "was delaying a recovery in the market".

NYK said: "The group worked to limit fleet and operating costs by continuing efforts taken in the previous fiscal year to boost cargo-loading efficiency, switch to new highly fuel-efficient vessels with capacity for 14,000 TEU, and optimise vessel assignment and economic performance. By implementing measures for cutting freight costs, particularly the efficient operation of container ships, the group improved profitability and its resistance to market fluctuations."

MOL said it carried "record high volumes" from Asia to the US during the period, while Asia to Europe volumes were "steady" with backhaul liftings at increased levels.

"The spot freight market proceeded at a significantly improved level compared with the same period of the previous year."

It added that annual contract rates "showed an overall rise upon renewal" and this combination, along with its continued cost-cutting measures, enabled MOL to reduce its loss in the sector.

This however had to be tempered against a 5 per cent decrease in volume on "K" Line's north-south routes, primarily due to the termination of its South America east coast services.

These much improved sector results in the second quarter of the year, when the majority of new higher rated contracts began to be recorded in voyage results, is further evidence of a return to profit in the liner industry, the UK's Loadstar reported.

ENLARGEMENT of the Panama Canal has enabled the Central American waterway to win back most of the all-water traffic between Asia and the US East Coast that it had lost to the rival Suez Canal route.

The Panama Canal's share of the total headhaul capacity on the route has risen to 74 per cent, the level it had in 2010, after slumping to 48 per cent at the beginning of 2016, according to Alphaliner.

The opening of the new locks in June 2016 shifted the advantage back to the Panama Canal as the larger neo-Panamax and sub neo-Panamax ships, now able to transit, helped lift average vessel size to the same as on the Suez route, the industry analyst says.

The Egyptian waterway has, however, retained the headhaul and backhaul legs of five all-water services, while five services that use the Panama Canal on the headhaul direction, return to Asia via the Suez Canal, according to IHS Media.

The battle between the two waterways is continuing, with the Panama Canal Authority planning to cut tariffs for neo-Panamax vessels from October 1. However, the reductions are relatively modest, at only 6 to 12 per cent, and may not be sufficient to entice carriers to reroute their backhaul services via the Panama Canal.

The Suez Canal Authority has also extended its 45 to 65 per cent rebates on toll tariffs for a further six months to the end of the year, which should ensure it retains some of the traffic for the time being.

The Panama Canal tariff reductions will benefit the nine existing services transiting the waterway on both legs with weekly savings of up US$400,000 for the carriers, based on estimated weekly discounts of $40,000 to $50,000 for each service.

Neo-Panamax ships, with 19 rows of containers, and sub neo-Panamax vessels, 16 to 18 rows, made 795 voyages, or 50.5 per cent of all transits, through the expanded Panama Canal during its first year of operations.

The number of 16- to 19-row container ships sailing through the canal is likely to almost double in the coming year, with around 1,400 transits, Alphaliner said.

Fifteen weekly services currently transit the Panama Canal of which nine make a return voyage, for a total of 24 passages.

At least two carriers are planning to launch new Asia-US East Coast services next year, which could significantly increase transits through the waterway, while five current trans-Panama services deploying classic 13-row vessels of 4,000-5,100 TEU capacity could be up-sized in the coming year, further boosting traffic of larger vessels.