An Italian military ship loaded with medical supplies and other humanitarian aid landed on Monday in the eastern Libyan port city Benghazi. 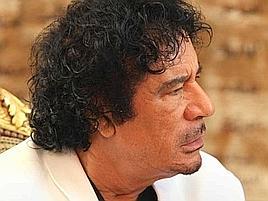 The ship transported the supplies to an area controlled by forces opposing Libyan strongman Muammar Gaddafi in a deepening armed conflict.

The ship is due to unload medical aid, as well as tents, blankets, food, water purifiers and electrical generators, before returning to Catania, Sicily, where it is based.The United Nations has appointed a new envoy to Libya, former Jordanian foreign minister Abdelilah al-Khatib "to undertake urgent consultations with the authorities in Tripoli and in the region on the immediate humanitarian situation." Last week the UN imposed sanctions on Gaddafi and his family and referred him and members of his inner circle to the International Criminal Court for investigation over possible crimes against humanity. Interpol has also issued arrest warrants for Gaddafi and 15 other Libyan nationals including members of his family and top aides.Separately, Italian foreign minister Franco Frattini said it would be difficult for his country to provide military jets to enforce a possible no-fly zone over Libya, a former colony ruled by Italy from 1911-1943. However, he left open the possibility that Italy would allow allies to use Italian military bases to conduct aerial patrols over the North African country.Three United States senators on Sunday went on television to encourage president Barack Obama to consider military force to protect Libyan rebels from a crushing response by Gaddafi.Former presidential candidate John F. Kerry, chairman of the Senate Foreign Relations Committee, raised the possibility of bombing Libyan airfields as a way of grounding Gaddafi's air force.
This news 9861 hits received.