Sources say the Turkish prime minister is envisioning a second strait in İstanbul as a preventive measure against disasters on the Bosporus, crowded with oil-carrying vessels, but a 1936 convention might prevent a prohibition of naval traffic on the Bosporus Strait, although a new arrangement may be possible. 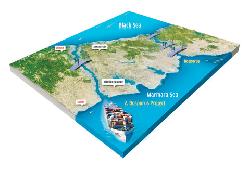 Sources say the Turkish prime minister is envisioning a second strait in İstanbul as a preventive measure against disasters on the Bosporus, crowded with oil-carrying vessels, but a 1936 convention might prevent a prohibition of naval traffic on the Bosporus Strait, although a new arrangement may be possible.

According to information Today's Zaman obtained from an official who wished to remain anonymous, Prime Minister Recep Tayyip Erdoğan is planning a huge construction project to build a canal between the Black Sea and the Marmara Sea through Silivri and Çatalca, the two westernmost districts in İstanbul, with the goal of taking the naval transportation burden off the Bosporus, which has one oil tanker every 53 minutes.

The Ministry of Transportation has warned that the number of tankers passing the straits has reached alarming levels and risks of an oil spill would increase as there will be more ships going through the straits after the conclusion of Caspian and Black Sea oil exploration. However, finding an alternative route for maritime vessels cannot be an automatic solution to the problem because of an international convention which might have to be revised.

Signed on July 20, 1936, the Montreux Con-vention Regarding the Regime of the Straits gives Turkey control over the Bosporus Strait and the Dardanelles and regulates passage of commercial vessels and warships. The convention went into effect on Nov. 9, 1936 giving Turkey the sovereignty to regulate the passage, and it also imposed restrictions on the passage of warships. In addition, a new arrangement cannot be made that would decrease the right granted to Turkey by the convention and the other countries bordering the Black Sea.

“Turkey can never close the Straits to international vessel traffic,” said Dr. Derya Aydın Okur, an academic from Marmara University specializing in international law. “There is now a regime particularly for war ships which is not applied in any other strait in the world.” She referred to the Montreux Convention allowing merchant and war vessels to pass freely through the straits in times of peace time, provided that that is an “innocent passage.”

This map is for illustrative purposes only. It was not drawn in accordance with any feasibility report.

“The principle of freedom of transit and navigation affirmed in Article 1 of the present convention shall however continue without limit of time,” Article 28 of the Convention reads. If an agreement cannot be reached for an amendment to any of the Convention’s articles after all diplomatic channels are exhausted, a gathering with the contracting parties would be held over whether a unanimous vote is required for the proposed amendment to be approved.

Okur added that even if the Montreux Convention is annulled, the document has a clause indicating that freedom of passage, which should be interpreted in the light of “innocent passage,” from the Straits would continue. What Turkey would be able to do in order to channel traffic to a new canal, she said, is to have measures to encourage passage through this canal. “For example, Turkey can demand support from the international community, in particular from the International Maritime Organization, in order to promote the benefits of the new canal,” she said.

International law expert Yücel Acer also said Turkey would not be able to close the Straits to vessel traffic as it is governed by the Montreux Convention. “Turkey cannot stop traffic on the Straits, but it can regulate it to ensure a secure passage,” said Acer, who is an adviser for the International Strategic Research Organization (USAK) based in Ankara.

“Turkey cannot force vessels to use an alternative canal for passage, but there could be cost and benefit calculations in force to encourage the use of another waterway. For example, a free passage from the Bosporus Strait would require a two-day waiting period, while the new canal would entail a fee, but a quick passage,” he added.

According to Turkish diplomatic sources, parties to the Montreux Convention should work on the issue and Turkey has a right to explain its rightful thesis regarding the topic. Of the diplomatic representation of the countries bordering the Black Sea, the Ukrainian Embassy declined to issue a statement on Erdoğan’s project, while Russian officials were not available for comment when approached by Today’s Zaman. Speaking on the condition of anonymity, a Bulgarian diplomatic official, however did say “it was just an idea and a distant project that is not relevant to our relations.”

When prompted by reporters yesterday Minister of Transportation Binali Yıldırım said that they do not have such a project on the indicated route in the Habertürk daily, which reported yesterday that a canal was planned near the Golden Horn. Yıldırım added that his ministry has no plans or projects related to the daily’s story.

According to Today’s Zaman’s sources, Erdoğan first considered the project when he was the mayor of İstanbul, but it evolved into its current form after two floods affected the city in 2007 and 2009. However, the same source also say Erdoğan took the project onto his agenda because of the possibility of an oil spill on the Bosporus, which is a frequent route for oil-carrying vessels. In 1979, a Romanian-flagged ship, the Independenta, loaded with 94,600 tons of oil, collided with another vessel in the Bosporus, resulting in the death of 43 crew members and a 27-day fire, not to mention the severe air and sea pollution which persisted for much longer. Erdoğan’s project is expected to offer a solution to sea traffic hazards and future floods.

Erdoğan discussed the feasibility of such a project with some experts from İstanbul University and decided to put it into practice, the same sources said, and added that more in-depth talks had been held with Russian and Italian companies, one of which, a Russian company whose name the source refused to disclose, told the relevant Turkish authorities that it could undertake the construction. According to the preliminary agreement with the company, the project is expected to cost between $8-10 billion and is planned to be built, not in a straight line, but by following streambeds. If everything goes as planned, the project will be based on a public-private partnership, as a part of which a Russian company will bear all the costs but would eventually hold the rights over any revenue earned from the canal’s traffic. The project was kept a secret because, the same source said, Erdoğan wanted to avoid any possible disputes between third parties over acquiring land in the region in order to sell it to the state at a later date at much higher prices.

The experts and the private companies who were consulted said it was possible to pool the region’s streambeds, on which the canal would be built, following the enlargement and deepening of the streams. They also told Erdoğan that the project could be completed by 2023, the centennial of the modern republic, sources said.