Israeli naval forces boarded the "Klos C" in the Red Sea, as the ship was sailing to Port Sudan on Mar 5, 2014, in the morning. 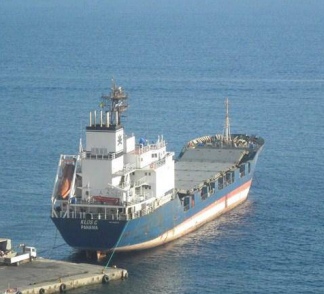 Israeli naval force intercepted ship full of missiles
Israeli naval forces boarded the "Klos C" in the Red Sea, as the ship was sailing to Port Sudan on Mar 5, 2014, in the morning.
The vessel with a crew of 17 was boarded by Israeli naval forces around 1,500 kilometers south of Israel off the coast of Eritrea and Sudan. The crew put up no resistance and no one was injured in the operation.The ship was full of weaponry bound for Palestinian terrorist groups in the Gaza Strip. The weaponry on board included dozens of M-302 missiles, which were hidden inside cement containers.
The weapons were originally flown from Syria to Iran. From Iran, they were shipped by boat to Iraq. The shipment was intercepted as it was being moved by boat from Iraq to Sudan, from where the weapons were to have been smuggled overland to Gaza.
The interception occurred shortly before the shipment was due to arrive in Port Sudan. It was not known whether the crew of the Klos C was aware of the weaponry on board. Israeli intelligence had been monitoring the arms shipment for many weeks. The shipment was first discovered several months ago when intelligence learned of Syrian-made M-302 missiles being flown from the international airport in Damascus to Tehran, under the direction of Iran's Al-Quds force.
From Tehran, the weapons were moved to the southern Iranian port city of Bandar Abbas. In Bandar Abbas, the weapons were loaded on board along with cement containers.
The "Klos C" sailed from Bandar Abbas to the Iraqi port city of Umm Qasr, where additional cement containers were brought on board. The ship then set sail for Port Sudan. The Israel Defense Forces Chief of Staff Lt. Gen. Benny Gantz commanded Wednesday's operation from IDF headquarters in Tel Aviv, while Israeli Navy Commander Vice Adm. Ram Rothberg oversaw the interception from a forward command post. The "Klos C" was towed to Eilat.