A SEAINTEL Maritime Analysis shows that Asia-ECSA spot rates have declined sharply from US$3,800 per TEU to $2,200 per TEU in just 11 weeks mainly due to renewed capacity injections. 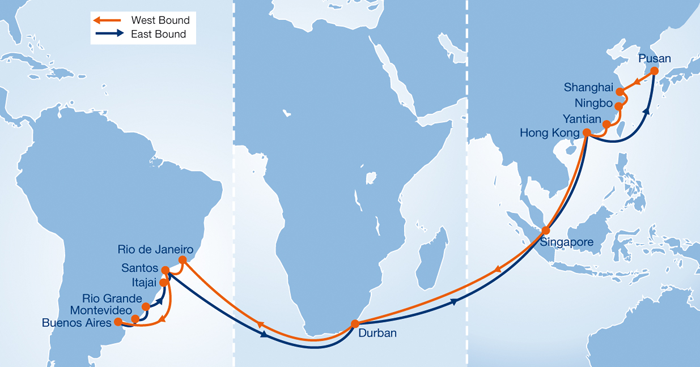 The Asia-ECSA trade lane has been subject to extreme swings in spot rates from 2012 onwards, with a very marked rally in rates in spring 2016, and an even stronger spike in summer 2017. The decline in the trade lane in the period 2013-2016 was triggered by the cascading of larger vessels into the trade. The carriers reduced the capacity in late 2015 through the cancellation of three of the existing six services.

The weekly capacity on the trade lane reached a low point at 23,500 TEU offered in the market in April this year, and shortly thereafter rates spiked at almost $4,000 per TEU. Having maintained capacity discipline for a full year, carriers have begun to inject capacity in the trade lane, presumably to take advantage of the high rates, primarily through the deployment of extra loader vessels from April 2017. Since April 2017, capacity in the trade lane has grown by 30 per cent - in turn driving the sharp rate reductions recently.

At the height of the overcapacity period, spot rates dropped to as little as $99 per TEU in February 2016, on what is arguably one of the longest and costliest trades to service. The restoration of rate levels in the Asia-ECSA trade was due to capacity discipline, where carriers outright cancelled services in order to bring supply and demand into better balance. The recent sharp rate decline is due to the opposite effect - a lack of capacity discipline, as the extra loaders have injected significant amounts of capacity.

CEO of SeaIntel, Alan Murphy says: "What will happen going forward depends on whether the carriers will cease their extra loader programmes, although with the lag-time previously seen between capacity action and the SCFI on this trade lane, we might see the spot rates decline for a few more weeks even in the absence of further capacity injection."