Navies from six continents and more than 30 nations kick off the most widely attended international exercise ever held in the region, Sept. 16. 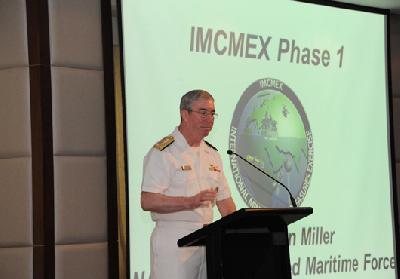 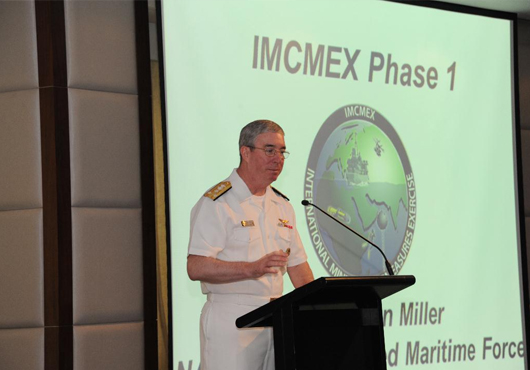 Navies from six continents and more than 30 nations kick off the most widely attended international exercise ever held in the region, Sept. 16.

International Mine Countermeasures Exercise (IMCMEX) 12 is the first of what is intended to be a recurring partnership event.

“This exercise is about mines and the international effort to clear them,” saidVice Admiral John W. Miller, commander, U.S. Naval Forces Central Command. “Represented here are the best of our individual countries’ efforts dedicated to securing the global maritime commons and I look forward to seeing how this exceptional team of professionals moves forward.”

The wholly defensive exercise consists of two distinct phases, the first is a symposium where senior leaders from participating countries will exchange ideas and view the latest mine hunting, sweeping and neutralization technologies provided by a panel of industry representatives and presenters.

In the second phase, ships, crews and observers get underway to train together to prepare for tactical execution. Ships will conduct at-sea maneuvers in three separate geographic areas, which will include mine

“Everyone here at IMCMEX 12 understands that countering the threat posed by mines is a critical mission to ensure security in the maritime domain,” said

Rear Adm. Kenneth Perry, commander, Task Force 522 and exercise director. “The work we will do here will strengthen relationships and enhance mine countermeasures interoperability among participating navies.”

The exercise will finish with leaders, liaison officers and observers gathering to discuss lessons learned during the three phases to further foster interoperability among participants.

The U.S. Central Command area of responsibility encompasses about 2.5 million square miles of water and includes the Arabian Gulf, Arabian Sea, Gulf of Oman, Red Sea, and parts of the Indian Ocean. This expanse, comprised of 20 countries, includes three critical choke points at the Strait of Hormuz, the Suez Canal and the Strait of Bab al Mandeb at the southern tip of Yemen.