AMERICAN west coast dockers of the International Longshore and Warehouse Union (ILWU) have severed ties with the AFL-CIO, accusing the labour federation of helping it member unions steal jobs that belong to the ILWU. 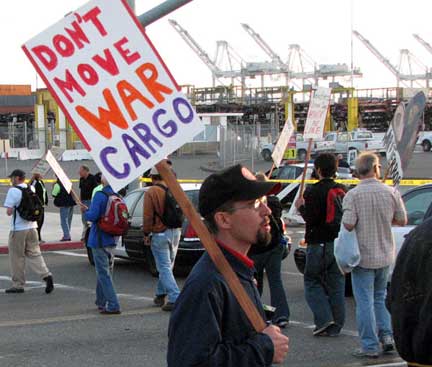 AMERICAN west coast dockers of the International Longshore and Warehouse Union (ILWU) have severed ties with the AFL-CIO, accusing the labour federation of helping it member unions steal jobs that belong to the ILWU.

"ILWU is about to start west coast longshore negotiations and faces the challenge of the ports soon being run by robotics," said ILWU president Robert McEllrath in a letter to AFL-CIO president Richard Trumka.

"The survival of the ILWU and the job security of our members depend on our having these remaining jobs, which will mostly involve the servicing and maintenance of the robotics and other machinery," he said.

"We will not let other affiliates jeopardise our survival and block our future as the primary waterfront workforce," he said, referring to other AFL-CIO member trade unions.

"A raid occurred in 2011 when one affiliate slipped into longshore jobs at the new EGT grain facility in the Port of Longview, Washington, and then walked through ILWU picket lines until we were able to secure longshore jurisdiction," he wrote.

"Your office added insult to injury by issuing a directive to the Oregon State Federation to rescind its support of the ILWU fight at EGT, which threatened to be the first marine terminal on the west coast to go non-ILWU," Mr McEllrath told the AFL-CIO president.

The ILWU has had a tumultuous history, first breaking away from the east coast union, the International Longshoremen's Association (ILA), in 1937 a few years after its establishment.

Before the American Federation of Labour (AFL) merged with the leftist Congress of Industrial Organisations (CIO), card-carrying Communist Harry Bridges (1901 -1990) was elected ILWU president and affiliated the union with the leftist CIO, getting himself appointed west coast boss.

But Bridges' power in the CIO began to wane as the Communist Party began to lose ground when it attacked then President Franklin D Roosevelt for his condemnation of the Nazi-Soviet pact to divide Poland between them in 1939. The CIO stripped Bridges of his rank by abolishing the position of west coast director.

The US Government tried without success in the 1940s and '50s to deport Bridges back to his native Australia. But the CIO did not consider itself bound the courts or its agencies and defended him until Bridges opposed European reconstruction Marshall Plan at which point the CIO expelled the ILWU in 1950 for being dominated by communists.

Once again independent, Bridges took to command until his retirement in 1977 after which the ILWU rejoined the AFL-CIO in 1988.

DOCKERS of the International Longshoremen's Association in Hampton Roads, Virginia voted 738-284 to ratify a six-year local contract, having twice voted down earlier proposals.

Other outstanding local contracts yet to be settled include those in Baltimore, Philadelphia and Charleston.