GERMANY's Hapag-Lloyd, now the world's fourth biggest container carrier since it's merger with Chile's CSAV, is wondering if size matters in ships that much in a times when oil prices have fallen 33 per cent in six months. 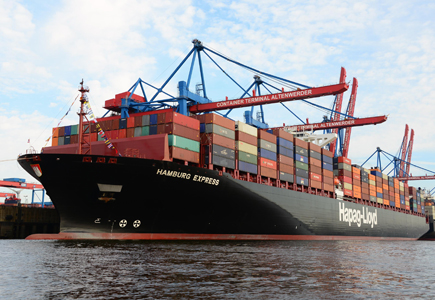 GERMANY's Hapag-Lloyd, now the world's fourth biggest container carrier since it's merger with Chile's CSAV, is wondering if size matters in ships that much in a times when oil prices have fallen 33 per cent in six months.

"If the bunker price goes down as much as it has in the last three to four months, then the benefit of having a bigger ship goes down considerably," CEO Rolf Habben Jansen told Newark's Journal of Commerce.

Nonetheless, the focus of his fellow members of the tonnage-light G6 Alliance is the acquisition of new bigger fuel-efficient eco ships. The G6, the smallest of the four top alliances does not deploy 14,000-20,000 TEUers.

Hapag-Lloyd expects to make a decision on new orders in April or May and that talks with its G6 partners are continuing and well underway.

"I am reasonably confident that also within the alliance we will have a proper joint plan for the upcoming number of years that can be concluded at the latest in the first quarter," Mr Habben Jansen said.

"You have to discuss the ordering and investment planning with your partners because you have to avoid a sudden flooding of the market," he said referring to his partners NYK Line, OOCL, Hyundai Merchant Marine, APL and MOL.

Mr Habben Jansen big drive is to achieve US$300 million a year in cost savings that it has been targeting since the December 2, after posting a first-half loss of EUR€173.3 million (US$215.9 million), EUR€100 million more than it lost in the first half of last year.

"Our priority clearly needs to be to improve the results," Mr Habben Jansen said, adding that other savings will come through the integration of its route networks and elimination of overlapping services.