IN the US bankrupted Hanjin containers are divided in three - boxes that belong to other carriers are handled normally, imports will be delivered if importers pay for the trip, but export boxes are most often refused. 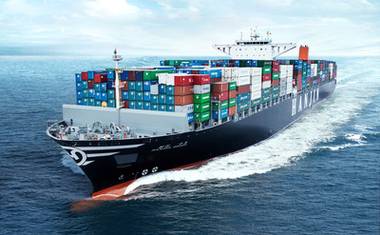 Hanjin: Imports delivered for pay, exports refused, chassis pile up at BCOs
IN the US bankrupted Hanjin containers are divided in three - boxes that belong to other carriers are handled normally, imports will be delivered if importers pay for the trip, but export boxes are most often refused.
A fourth more troublesome category is creating itself. That is, import boxes having had their delivery paid for, end up empty still mounted on their chassis at importers' warehouse yards.
If parked at those warehouses, says IHS Media, the chassis will be taken out of circulations and shortages will develop in a short time.
Terminal operator SSA Marine wants the Port of Oakland designate a near dock storage site in the harbour area where Hanjin empty boxes can be stored.
Longshoremen would control the site with the equipment needed to remove the empties from their chassis. Truckers would then put the chassis back in circulation.
Long Beach, and adjacent Los Angeles, said they also have available near dock properties that could be used.
Weston LaBar, executive director of the Harbour Trucking said: "There's still a lot to figure out. There's not a whole lot of information available, but we will work with the ports on possible solutions."
But the problem affects boxes too. Said CH Robinson Worldwide ocean service chief Sri Laxmana: "The biggest problem is that once drivers deliver the container there's no one to take back the empty."
Those stranded empties, he said, may lead to a container shortage in Asia.
"The big, big problem is you have a ton of containers either on the water or stuck at ports and inland container yards, and that's going to create a massive lack of containers in Asia," he said.
Northwest Seaport Alliance of Seattle and Tacoma spokeswoman Tara Mattina said Hanjin's Terminal 46 in Seattle was not accepting export loads or empties, but is unloading import boxes.
The Terminal 46 lease is 54 per cent owned by Hanjin and 46 per cent owned by Mediterranean Shipping Co (MSC).
The Port of Vancouver, in Canada's British Columbia, will no longer receive Hanjin ships, but one is still there, waiting to be moved on.
"The [5,752-TEU] Hanjin Vienna completed cargo operations and is still at GCT Deltaport awaiting instructions from her owners," said Louanne Wong, spokeswoman for GCT.
"If she does not sail to a foreign port, she will be moved to anchorage to free up the berth."
On the east coast, Maher Terminals, the largest terminal at the Port of New York and New Jersey, told customers that Hanjin import deliveries must be prepaid and that Hanjin exports won't be accepted.
The terminal operator added that the main Maher terminal and Columbia ContainerServices' yard for offdock depot of empty containers would no longer accept Hanjin empty containers, either.
The Georgia Ports Authority has blocked one Hanjin ship from calling at its Garden City container complex at Savannah, a Hanjin spokesman told Reuters.
Officials at the South Carolina Ports Authority said there were no scheduled Hanjin vessels en route to the Port of Charleston.
The SCPA released a detailed protocol for handling empties, import and export Hanjin container loads. No empty Hanjin containers will be released from terminals in South Carolina until further notice.
In Virginia, port officials there said waterfront operations will not be accepting any inbound Hanjin cargo for export. The port, however, will accept empty Hanjin containers at the Pinners Point Container Yard.
Virginia Port Authority spokesman Joe Harris said the port is developing plans to handle Hanjin cargo on site.

Hanjin Shipping files for chapter 15 bankruptcy protection in the US