France has finally succumbed to the pressure of its NATO allies and, according to a statement issued Wednesday by the Office of the French President Francois Hollande, has decided to suspend delivery of Mistral ships to Russia. 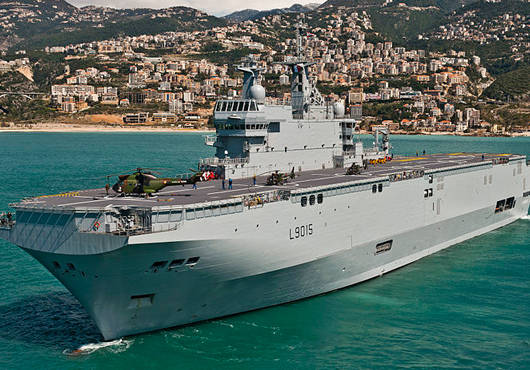 France has finally succumbed to the pressure of its NATO allies and, according to a statement issued Wednesday by the Office of the French President Francois Hollande, has decided to suspend delivery of Mistral ships to Russia.

The 1.2 billion euro deal for the two ships, also known as helicopter carriers, for the Russian Navy was signed in January 2011 and the first ship was scheduled for delivery this October.

France had said that the delivery of two warships to the Russian Navy will not be affected by the current EU sanctions imposed on Russia amid the Ukrainian crisis. The contract faced fierce opposition, especially from the U.S. and NATO, as tensions over the political situation in Ukraine continue to rise.The decision is rooted in Russia’s actions in Eastern Ukraine that are described in the statement as being “against the foundations of Europe’s security”. However, the suspension of delivery will not mean cancellation of the contract, as the delivery is suspended until November.

In the latest turn of events, Russian President Vladimir Putin proposed a ceasefire plan in eastern Ukraine on Wednesday. However, the move was interpreted by the Ukraine as an attempt to tone down the situation ahead of  NATO summit and a potential wave of even harsher sanctions from the EU.

“The president of the republic has concluded that despite the prospect of ceasefire, which has yet to be confirmed and put in place, the conditions under which France could authorise the delivery of the first helicopter carrier are not in place,” the statement read.

According to Russian news agency Itar-Tass, the cancelation is not likely to happen, as, according to sources well informed of the matter, “the shipyards did not get any instructions on suspension of the works which have entered the phase of completion.”

On the other hand, Russia’s Defence Ministry said the decision would not hinder the modernisation of its military nor hold back its reform plans, Itar-Tass  reported.

ClassNK to Reveal MOL Comfort Findings by End of September