FPS NZ thinks outside the box!

FPS New Zealand has once again proven its abilities in the highly-specialised business of transporting aircraft,

FPS NZ thinks outside the box!

FPS New Zealand – a member of the FPS Group of independent forwarders and NVOCCs - has once again proven its abilities in the highly-specialised business of transporting aircraft, with the successful movement of the world’s only operational De Havilland Mosquito bomber from New Zealand to the USA.

The aircraft - one of 80 originally ordered by The Royal New Zealand Air Force for service in World War II - has been the subject of a total restoration by FPS client AVspecs. This took the company’s owner Warren Denholm and his team over eight years to complete, and the plane has now been returned to its full former glory. Subsequent flights over New Zealand have drawn thousands of spectators.

The aircraft is now moving to a new home at the Military Aviation Museum, Virginia Beach Airport, USA – founded and owned by renowned enthusiast Jerry Yagen – where it will join an impressive line-up of restored aircraft from WW1 and WW2.

Flying the Mosquito from New Zealand to the USA under its own power was ruled out, because the distances involved exceeded its range of 1500NM; so FPS was tasked with re-locating the 7-tonne aircraft safely. Highly-detailed planning for the shipment began in October 2012.

FPS initially explored chartering a giant Antonov An-124 freighter, but the cost was found to be prohibitive. The next option - carriage as deck cargo – was considered too risky as it would have exposed the priceless aircraft to the elements.

So, true to form, FPS came up with a safe and cost-effective alternative solution: partially dismantling the aircraft, and shipping it in a custom-built ocean container that could accommodate the aircraft’s longest component. FPS accordingly commissioned an ocean box 60ft long x 10ft 9 ins high, with a protective metal bubble to accommodate the protruding wing assembly.

AVspecs dismantled the aircraft, which was then loaded into its special container and shipped to Philadelphia. As the giant box could not be transferred by feeder vessel to Norfolk, FPS arranged overland trucking to Virginia Beach, over 450kms away. The exceptional length and height of the load required OOG permits, due to restrictions on the route. 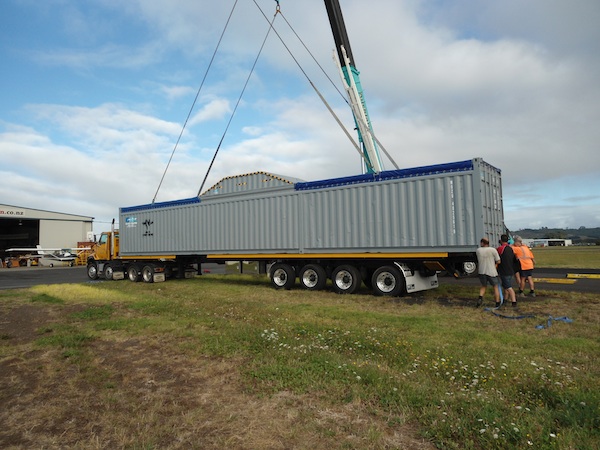 The aircraft has now arrived safely at its new home, and is being re-assembled by the AVspecs team. Says Warren Denholm: “Shipping the Mosquito was always going to be a challenge and I am very pleased with the outcome, as is our client. The personal service that we received during the planning stages was brilliant and continued right through till the eventual safe arrival of the aircraft in Virginia.”

Adds Dev Dhanjee, General Manager of FPS New Zealand: “It was a huge pleasure and honour to be involved in transporting this beautiful aircraft to its new home. It was a challenge, but one which we successfully overcame. We’re glad that we have played a part in displaying this wonderfully-restored historic machine for the enjoyment of generations to come.”

The De Havilland Mosquito was designed in 1940, and – with its twin Rolls Royce Merlin engines, as later fitted to the Spitfire - was once the fastest production aircraft in the world. It is regarded by many enthusiasts as the best-looking aircraft ever built. Auckland-based AVspecs is renowned for its longstanding expertise in rebuilding such classic “warbirds”, and informed observers from around the world have praised the Mosquito rebuild as the best restoration they have ever seen.

CEVA Logistics links up with project44 for enhanced transport visibility