It took just two minutes for surging seas off the NSW Central Coast to rip more than 80 containers from the deck of the 'YM Efficiency', the first report into the incident revealed 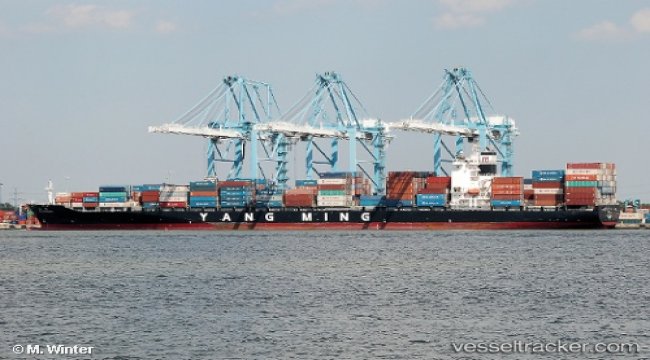 It took just two minutes for surging seas off the NSW Central Coast to rip more than 80 containers from the deck of the 'YM Efficiency', the first report into the incident revealed. She was sailing from Taiwan to Sydney when it was hit by huge seas off the coast of Port Stephens sending 81 containers tumbling into the ocean and a further 62 containers damaged. The Australian Transport Safety Bureau on July 23 said it was at about 12.30 a.m. on June 1 when the ship was hit with a 'period of quick, heavy rolling for about 60 to 90 seconds'. The ship's master estimated the vessel was twisting 30 degrees port and starboard in the seas as the alarms went off. The main engine was shut down and loud noises were heard on the deck. The second officer turned on the deck lights and saw containers had been lost and damaged. Two minutes later the rolling had subsided and the master took control of the drifting ship. The ATSB's preliminary report found the crew had checked the container lashings multiple times before the storm and had logged the deteriorating weather. Authorities worked feverishly to locate and map the drifting containers which posed severe risks to other boats in the water. For weeks after the incident, locals and Roads and Maritime Services removed tonnes of debris during clean-up efforts as plastic began washing up on pristine beaches as the cargo burst from damaged containers and floated ashore. A hydraulic survey vessel was also brought in by the Australian Maritime Safety Authority, as arranged by the shipping company's insurer, to search the ocean floor as the clean-up continued into mid-June. A final report into the incident which littered Port Stephens beaches with debris isn't expected until mid-2019. The investigation is still underway and the ATSB will examine the Efficiency's container stow and lashings, its stability, the actions of officers and crews and weather conditions during the incident. The final report is not expected until mid-2019.