During welding works an explosion occurred, and subsequently a fire broke out in a container in the aft of the "CCNI Arauco" at the HHLA container terminal at the Burchard Quay in Hamburg-Waltershof on Sep 1, 2016, at 1 p.m. 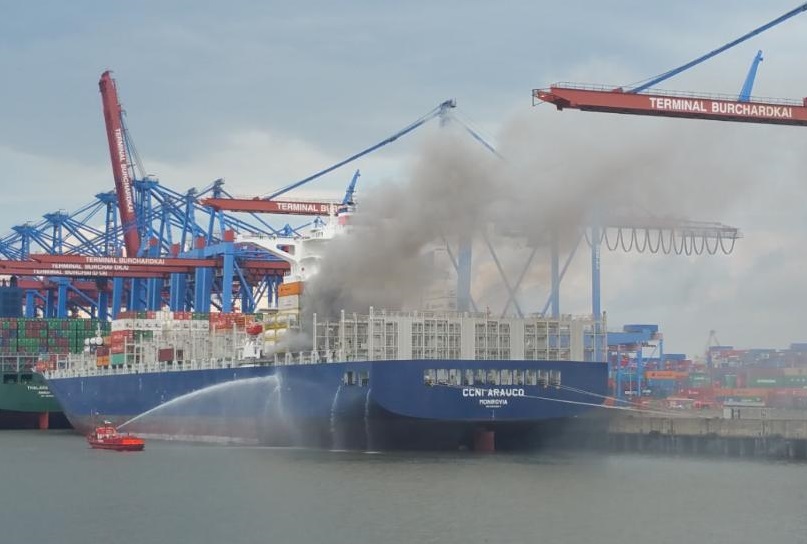 Fire on boxship "CCNI Arauco" in Hamburg
During welding works an explosion occurred, and subsequently a fire broke out in a container in the aft of the "CCNI Arauco" at the HHLA container terminal at the Burchard Quay in Hamburg-Waltershof on Sep 1, 2016, at 1 p.m.
The ship had docked in Hamburg on Aug 31 at 10.30 a.m, coming from Tanger.
Three crew members escaped with slight injuries and were taken to hospital for medical treatment. The fire spread below deck.
The fire rescue was alerted and attended with five engines, 150 forces and the two fire boats "Oberbaurat Schmidt" and "Löschboot Repsold" to cool down the hull of the ship. Their attempts were supported by the tugs "Bugsier 18" and "Bugsier 19".
The fire brigade Hamburg was supported by the volunteer forces from Harburg, Finkenwerder, Neuenfelde, Francop and Sinstorf.
Work was complicated by the fact that fire fighters had to climb 20 meters deep into the cargo hold to access the fire site.
In the afternoon the anti pollution vessel "Neuwerk" was sent to Hamburg. The terminal operations were stopped. Due to strong smoke development and the west wind which pushed the smoke towards town, the residents in Hamburg-Othmarschen, Neustadt, Veddel, HafenCity, Rothenburgsort, Steinwerder, Kleiner Grasbrook, Hamm and Neustadt were asked to jeep doors and windows closed.
The Katwarn-System (disaster warning system) was activated.
A helicopter of the police was circling overhaed. The Waltershofer Damm was barred for car traffic causing queues of 18 kilometers length on the freeway A7 in both directions.
The ship was evacuated and the cargo hold behind the accomodation block was to be unloaded for the further works to tackle the fire. There were few hazardous goods in the cargo hold, except one box with car batteries.
Other hazmat cargo was in the foreship.which was not affected by the fire. The intention was to shut off the hatches and flood the cargo hold with CO2. Around 5 p.m. work started to close the cargo hold with the 20x20-m-hatches. 40 more respirators were ordered. An inspection was scheduled for 6 p.m.