With construction underway on the first ever Oblique Icebreaker, research specialist Aker Arctic Technology has unveiled a new version of the unique vessel type 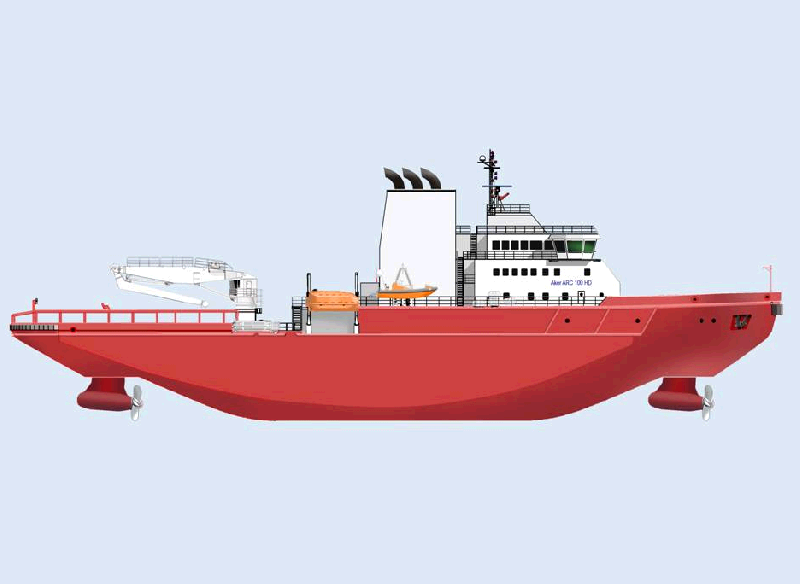 With construction underway on the first ever Oblique Icebreaker, research specialist Aker Arctic Technology has unveiled a new version of the unique vessel type that will bring ice management and pollution control in thick first year ice to a new level.

The first ARC 100 is due delivery to the Russian Ministry of Transport in early 2014, after a collaborative build involving Kaliningrad’s OJSC Yantar and Helsinki’s Arctech yards. The resulting newbuilding is a breakthrough in asymmetric three-thruster conceptual design, which will bring new capability in terminal operations, ice management and oil spill response in freezing seas.

The 76m long vessel, with her oblique ice-breaking action is a game changer in year-round oil spill response. Additionally, a single Oblique Icebreaker cuts channels through ice for cargo ships to follow as wide as two equivalent conventional icebreakers moving ahead side by side.

Planned to be classed by the Russian Maritime Register of Shipping as an Icebreaker 7, the design is based on extensive model tests at Aker Arctic, Helsinki. Tests demonstrated that the ARC 100 HD will be able to break through 1.5m thick ice when moving ahead and astern at 5 knots (2 knots through 2m thick ice). In the oblique mode, it will be able to cut a 50m wide channel through 1.5m thick ice. In broken ice, its vertical side will push ice pieces and its inclined side break ice floats.

As well as increased size, power and manoeuvrability, the ARC 100 HD adds new ice management and oil spill response functionality. Its dynamic positioning capability will mean it can ‘spin on the spot’ to widen channels. It will also be able to assist during ice field direction changes – effectively cutting ice alongside the cargo vessel exposed to unfavourable ice flows.

Aker Arctic has incorporated specific oil recovery measures. As with the ARC100 design, instead of the vulnerable rubber arm sometimes seen in oil spill response operations, the ARC 100 HD’s vertical hull side itself will act as a sweep arm up to 60m across in heavy waves. The vessel will also feature a skimmer system, including a side door, effective in-built brush skimmers/collector tanks for oil separation, recovered oil transfer pumps, and a discharge pump.

“This project is a significant milestone for icebreaker expertise, as it shows the way design and construction efforts are keeping pace with continuing demand for harder to recover energy sources”, says Mikko Niini, Managing Director of Aker Arctic Technology Inc. “With the awarding of drilling permits in the Arctic subject to increasing scrutiny, this is another example of Aker Arctic Technology’s commitment to meeting the challenges set by nature.”