HONG KONG's Hutchison-owned Port of Felixstowe, 70 miles north of London, has awarded the lead contract to double its size. 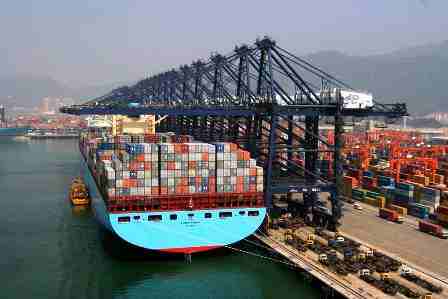 HONG KONG's Hutchison-owned Port of Felixstowe, 70 miles north of London, has awarded the lead contract to double its size.

Britain's biggest container port recently awarded the contract to the VSBW consortium, made up Volker Stevin and Boskalis Westminster, which will extend the combined lengths of berths 8 and 9 to 3,018 feet.

The quay is constructed with tubular piles in a design similar to the existing berths 8 and 9.

"Tubular piles are used because sheet piling would simply not be strong enough for a wall of this size to support the quay structure," said Mr Seaman. The strength of the quay wall allows the berths to be dredged to 59 feet alongside depth.

The first phase development at berths 8 and 9 included 10 twin-lift ship-to-shore cranes from Shanghai's ZPMC, each capable 24 containers across.

When the current expansion is complete, these will be joined by three more same-size ZPMC quay cranes.

"We handled over 4.1 million TEU in 2014," he continued, "which puts us above pre-recession levels. We have over 4,000 ship calls annually, are now at 200 crane moves an hour and service around 33 shipping lines that operate some 90 services to and from 365 ports around the world.

"More and more containers are arriving on mega vessels - the Berth 9 extension will give us greater flexibility to berth the world's largest ships."

Numbers at the port's three rail terminals have also risen. At the newest North terminal, which is capable of loading trains with more than 30 cars, two new rail-mounted gantry cranes began operations in May.

"We have 60 rail transports, 30 arrivals and 30 departures every day across the port," Mr Seaman said. "The North Rail Terminal has nine tracks and trains are moved between them on a traverser, which was the first of its kind at an intermodal terminal in the UK."