Criuise cancelled due to Irma

The tanker Maersk Rosyth sailing on Rotterdam Nieuwe Waterweg outbound for the UK had lost all its power on the river near Maassluis. The tanker was drifting to shore when a nearby tug Fairplay 23 went for assistence, but could not make a towing line because teh tanker could not use its winches. The captain of the tug decided to move his vessel between the close coming shore and the tanker and started pusing with full power. At a certain moment the shore came to close and the tug had to move out as fast as possible. At that stage the tanker could restore its own power and could stear to the middle of the river. On the picturer can be seen how close the tug and the tanker were to the shore. It shows also the skills of teh captain of Fairplay 23 to get out on the right moment. Result was that one crew member of teh tanker was hurt during start up of th engines and was taken to hospital. The tanker was anchored in Rotterdam Europoort for investigation by the port authorities photo : cees kloppenburg Maritime Photo Maassluis. all the pictures can be found on www.maritimephoto.info 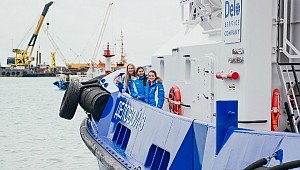 Tug deployed from Salalah to assist in salvage