Drunk captain about to run ship aground

The "Wilson Avonmouth" was in danger of running aground north of Helsingør on Oct 10, 2012, around midnight. 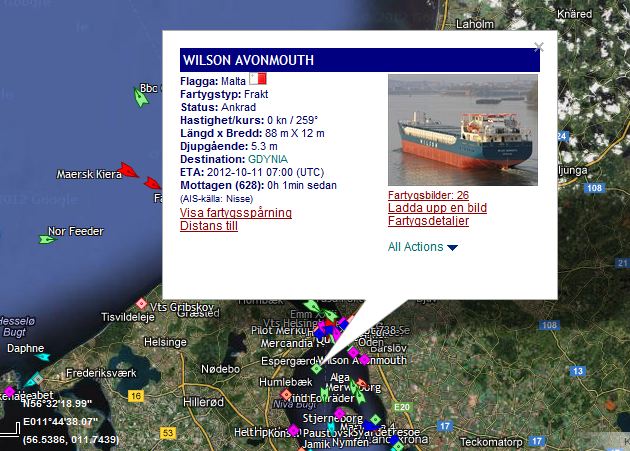 Drunken captain woke up at the very last minute

A quick response and great cooperation between Danish and Swedish authorities prevented a Maltese-registered cargo ship running aground north of Elsinore on Tuesday night.

Around midnight VTS Øresund found that the Maltese-registered cargo ship was heading towards ground north of Elsinore.

The ship was southbound and had during the last hour kept the same course.

According VTS calculations, course and speed would lead to a grounding within approximately 30 minutes and everything therefore had to be initiated extremely quickly and effectively to get the ship to change course.

They tried to reach the freighter by radio continuously but without any response.

To contact the ship other ships in the area were contacted and asked to assist and a rescue helicopter and the Swedish Coast Guard was deployed. 10 minutes before grounding contact was finally made with the ship.

It quickly changed its course away from the coast and a grounding was prevented.

The subsequent failed communication led to suspicion of drunken sailing and Danish police was contacted. The police wanted to clarify the circumstances, including conducting a search of the crew. The police soon finds out that the captain is drunk and they arrest him.

The Ukranian-born captain had a high percentage of alcohol in his blood and is to be charged with breaking maritime safety. The freighter, Wilson Avonmouth, is at 3,595 DWT and is 88 meters long.