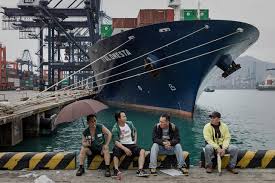 "While Asia-Europe and transpacific services would theoretically have been affected by the strike, our ship reliability results prove it did not impair reliability at all," said Drewry research manager Simon Heaney.

It was the short-haul carriers that suffered. "Carriers diverted scheduled calls at Hong Kong to nearby ports. On longer distance trades when ships have more opportunity to catch up, the disruption barely caused a ripple," he said.

Yang Ming usurped Maersk Line as the most reliable major carrier (defined as having a minimum of 100 voyage counts and 40 ship operated voyages per quarter) with an all-trades on-time average of 83.7 per cent in the fourth quarter.

Despite improvements in east-west trade reliability, the average on-time performance of containerships across all trades covered declined to 70.5 per cent, down from 72.8 per cent in the first quarter, said the report.

"The average on-time performance has now declined for two consecutive quarters and the latest result was the worst since the first quarter of 2012 (69.3 per cent) and was 2.8 per cent points lower than recorded in the same quarter last year," said Mr Heaney.