The cost of sending 80,000 mt crude oil cargoes on the cross-Mediterranean route has dropped to the lowest level in almost five months, with the tonnage versus cargo ratio currently weighted heavily in charterers’ favor. 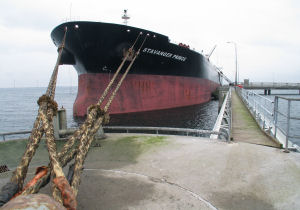 The cost of sending 80,000 mt crude oil cargoes on the cross-Mediterranean route has dropped to the lowest level in almost five months, with the tonnage versus cargo ratio currently weighted heavily in charterers’ favor.

The primary driver of the dropping rates has been a lengthy Mediterranean position list, which grew last week amid low levels of chartering inquiries. “It looks a very soft market. There is a good supply of ships and delays in the Turkish Straits seem to be coming down,” said a shipbroker. Delays through the Turkish Straits — the Bosporus and the Dardanelles — are common in the winter season, leading to ships sitting idle outside the Straits thus restricting the position list in the region.

There were two separate closures of the Straits last week, due to snow and low visibility, but sources say that delays are easing this week, and that an increasing number of ships are passing through the Straits each day.

This has led to an increase in the number of available ships in the Med, which was in evidence Monday when Petrogal was heard to have received 10 offers for a Sidi Kerir-Portugal 80,000 mt cargo.

There was some potentially encouraging news for shipowners early this week though, as shipping and trading sources said that crude exports were set to resume at the Libyan port of Zueitina after an eight-month hiatus.

Sources also said Marsa al Hariga had reopened after a short closure. This should lead to an increase in Aframax cargoes coming into the Mediterranean market but shipping sources said there would need to be a clearout of tonnage before any positive impact would be felt.

“There are plenty of ships to bounce off,” said a shipbroker.