Costa Concordia: A major navigational error, or what? 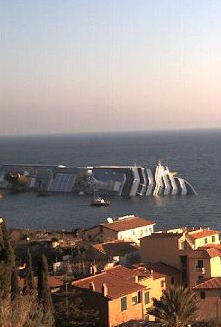 According to the published route, ship, inexplicably, seems to have followed a very dangerous route.

According to www.denizhaber.com; the following issues clearly seen in the ship's route from Civitavecchia till the site of accident:

After moving to Civitavecchia'dan ship followed on the normal route.

This route is kept clear from the shallows, leaving the island of Giglio on the Port side, passing the channel  between Giglia and  mainland of Italy route. At this stage, Costa Concordia followed a route of 298 degrees.

However, in a distance 7-8 nautical miles from the Channel between the island and the mainland of Italy, the ship made a course alteration, up to 20 degrees by altering the course to 20 degrees to port side,, This course alteration has no sense, because it obviously made the vessel heading to the Giglio Island. Lets make an estimate: The ships bridge wanted to give a close berth to the Island.. There is no other explanation. We cannot talk about a rudder failure since ship seems steering good. Made a good course change.

Finally,  the ship passed close to the rocks at the east side of Giglio Island.

The web site asks: Why the giant ship passed so close to these rocks very close to the Island? What made ship to go there, and if that was due to a failure, why the passengers were not alarmed in due time?

And as tha captain declares that he tried to steer the ship towards the Giglio Pier, ıt cannot be due to a rudder failure.

If there is not a rudder failure, and the ship is steerable, the major question still remains:

"Why such a big ship passed so close to the  rocks?"

If this is correct, the maritime route to the AIS in terms of technique that will have emerged to explain the many points that are in need. 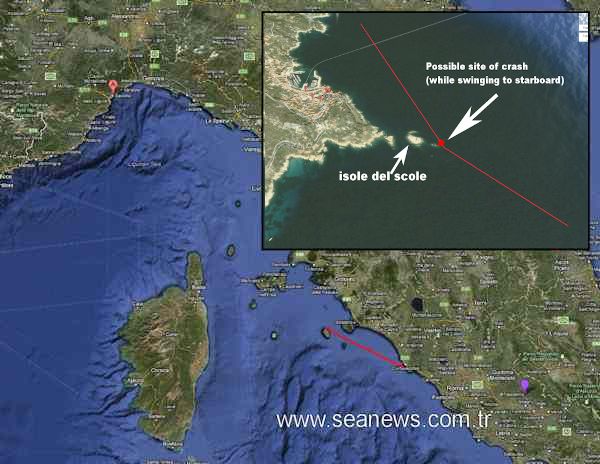 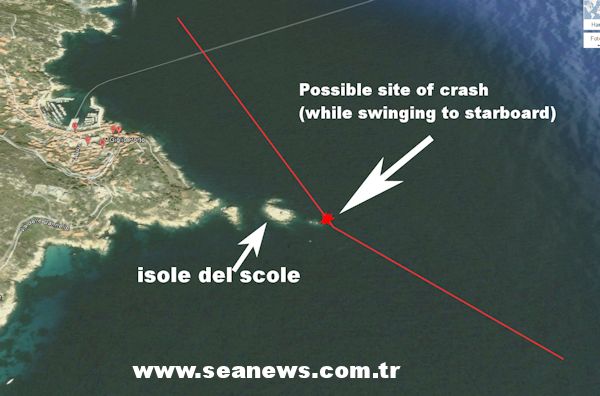 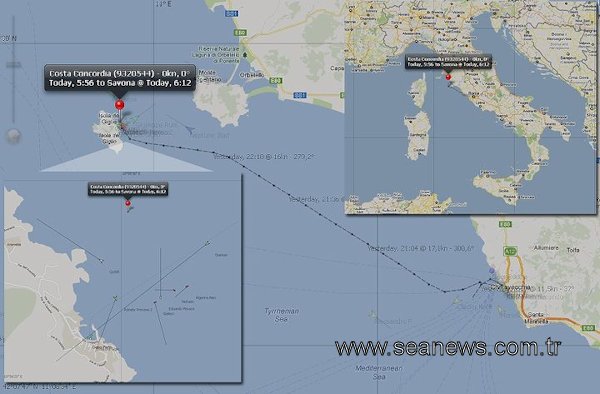 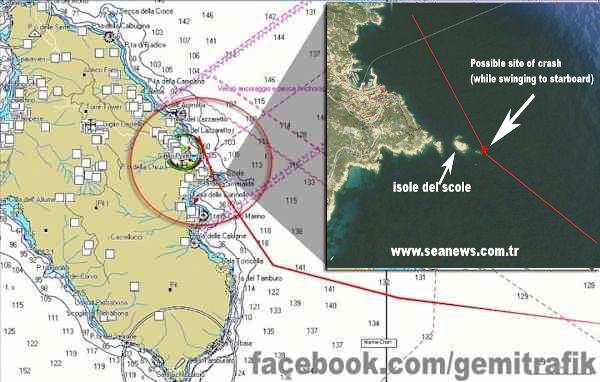 Experts commented the Costa Concordia disaster at Turkish online maritime portal www.denizhaber.com . Experts agreed on that Captain Francesco Schettino had the goog intention to give a close berth to Giglio Island; but however, Captain's professional skills was not capable to support the scope of this intention.

Tradition Fine, but how about maneouvering skills?

DenizHaber'e maritime experts who commented on the subject, said "a beautiful tradition, but not the same for Captain's skils " in the form of summarized events.

Experts agreed on the good intention of Captain Francesco Schettino's good intention to pass very close to Giglio island-as his predecessors used to do.

But, on the other hand, the rocky shores and rocky sea ground close to the island required expert maneouvering skills, they said.

Was SQUAT accounted for?

According to experts; "Such ships has a draught of about 8 metres, but however, as the ship gets underway, she also "squats". Effect of the squat increases as the ship's speed increase. It might be as much as 3 metres as the ship gets underway up to 15 knots. Effect of squat further increases at shallow waters. Most of the captains either does not know or does not account the effect of squat at restricted waters. This might be the case for Captain Schettino, because he was quoted as saying that the rock should not be there. May be the rock should be there but not the ship. Because it was ship's draught was increased; it was not the waters shallowed" experts said.

Experts also pointed out that electronic equipment was not only be relied upon to navigate in such constrained waters. "The captain could maneouver by his local knowledge at such restricted areas, there is no time to look at electronic equipment and take a decision. Ships drift due to course alterations, even centimeters are important, and squat is also important if the ship's speed is over 5 knots. Therefore, usually such areas are pilotage areas. What taught at schools- even before right is starboard and left is port- is the proverb "SAFETY IS AT OPEN SEAS". The course alteration to Giglio island for a salutation three long is therefore a big risk for ship's safety" experts quoted.

Experts also of the opinion that if there was not a strong rudder alteration to starboard, the gash on the starboard side would be not that effective, if did not happen at all.

See the full story at denizhaber.com by the following link:

Here's Vessel Traffic on the discussions on the subject ...