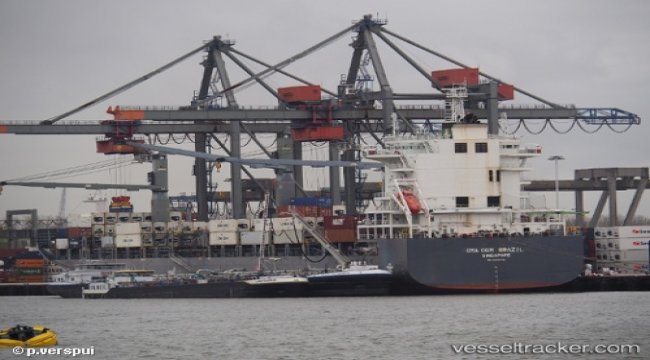 20 June 2018 - 10:07
The 'CMA CGM Brazil' towed a 46-foot sailboat with two sailors aboard to safety in St. Marten after the sailboat reported they were taking on water and disabled approximately 315 miles east north east of San Juan, Puerto Rico on May 24, 2018. U.S. Coast Guard rescue authorities in San Juan were notified by the two sailors who's boat was taking on water through the rudder shaft. While they were able to keep up with the flooding with pumps, they were afraid they may have to abandon ship.The Coast Guard queried the Amver system and located the 'CMA CGM Brazil' and requested it divert to assist the sailboat. The master of the 620-foot ship agreed to divert and assist if possible. The container ship was only 45 miles away from the distress location and was able to locate the sailboat.The master devised a plan to tow the sailboat to a shallow, safe harbor. Despite ten knot winds and five foot waves, the crew of the 'CMA CGM Brazil' was able to tow the sailboat to St. Martin. The two sailors were in good health and able to stay aboard the sailboat.The container ship handed over the sailboat and two survivors to St. Martin Coast Guard authorities and resumed its voyage.
This news 1529 hits received.