This is what emerges from the conversation between the rescuers and the pilot on board the MSC. A similar reconstruction also of the company of tugboats engaged in the landing. 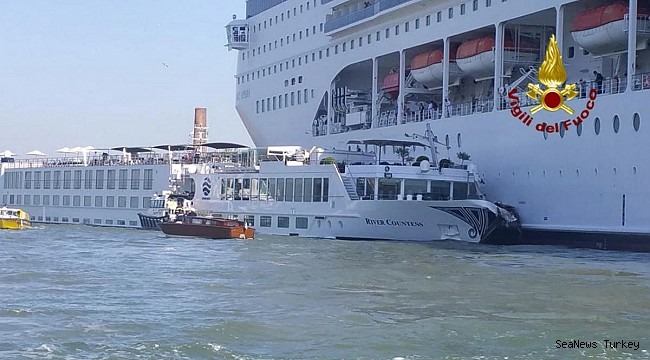 There would be a blackout of commands on the MSC ship that caused the accident in the Giudecca Canal in Venice , where the large cruise ship crashed into the quay and a tourist boat. This is what emerges from the conversation between the rescuers and the pilot on board the MSC. A similar reconstruction also of the company of tugboats engaged in the landing.

"Presumably there was a loss of commands ...". A few minutes of conversation, between the operations room of the Port Authority, and the command bridge of the 'MSC' explain the drama of the incident that took place in Venice. This is the dialogue between the rescuers and the ship. «... Do you update us on the current situation? exchange". "He is the pilot who talks, the commander is engaged ... At the moment we are on the ship with the bow pre-eminently resting on the '29', we have the bow tug that broke the cable and in assistance to the 'River Countess', which is on our left side. At the stern we have always kept the tug with the cable and we are still ». "Presumably - continues the pilot on the MSC - there has been a loss of controls, we have activated all possible procedures to avoid what eventually happened, that is the impact". The phone call continues: "we have given orders to fund the two anchors and grab them, we have put the bow tugs in force to widen the opposite side to 29, and the stern one in full braking to stop the ship, but from the bridge we have not understood well what happened ».

There was a blackout on the cruise ship MSC Opera, said to the Adnkronos Davide Calderan, director of the Panfido company that manages the tugs: "What happened is that the ship had a blackout at the controls of the bridge that was verified at the church of the Redeemer. The anomaly was immediately communicated by the MSC to the tugboat, but the march of the ship remained grafted with the engine that passed from a speed of 5.5 knots to one of 6 ".

This is the reconstruction made by the MSC company: «This morning, around 8.30, MSC Opera maneuvering towards the Vtp terminal for mooring had a technical problem. The ship was accompanied by two tugs and hit the dock at San Basilio. At the same time, a collision with the river boat occurred ». "All the investigations to understand the exact dynamics of the facts are under way - the note continues - the company is ensuring the maximum collaboration and is in constant contact with the local authorities".

Impressive voices that come from amateur movies shot by the same passengers of the 'MSC', and that document the fear of those moments. «Oh my God !, oh my God ..! Someone fell into the water, hold on. " It is the frightened voice of a tourist on the bridge of the 'MSC' «Opera», while the bow of the ship continues without brakes towards the quay, then covering with the enormous silhouette the tourist boat on which it will collide. "We must not get off the ship ..." continues the woman, interrupted by others "oh my God", and expressions of fear of the other passengers.

"When we saw the advancing ship everyone started screaming, everyone was running. We were in the reception area, I didn't know what to do, I walked away quickly making a jump to go down to the shore, "said a sailor who was on board the tourist boat struck by the ship of 'MSC' out of control. In the stampede the young man suffered a slight wound to his arm, "The captain - the young man's story goes on - then took me and brought me to safety: I saw the nearby ship, it was very big"."These ships - he adds - should not be allowed to pass here. There are small boats, people who sail and big ships can lose control, and this is not good ».