THE big question facing ocean carriers, shippers, truckers and railways alike in an age of mega ships, is how well cargo moves on and off the docks of ports not suited to mega surges of containers. 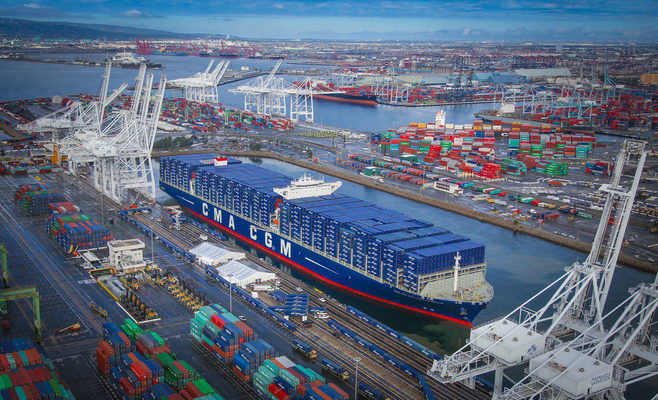 Cargo surges from mega ships to test US east and west coast ports in 2016
THE big question facing ocean carriers, shippers, truckers and railways alike in an age of mega ships, is how well cargo moves on and off the docks of ports not suited to mega surges of containers.
The coming year will be marked by major changes in supply chain logistics in the transpacific trades, says IHS Media. For not only are mega ships coming en masse, so are mega mergers and resulting mega alliances, the latest being between Cosco and China Shipping.
Also coming is the acquisition of APL parent NOL by CMA CGM, which subject to regulatory approval, should be a done deal in the second half.

While Germany's Hapag-Lloyd and not quite digested Chile's CSAV, we can also look forward to Hyundai Merchant Marine and Hanjin Shipping merging given Korean government pressure in the face of big losses.
Merged entities across the board will results in different alliances, which seemed so settled not long ago. Thus G6, Ocean Three and CKYHE alliances are expected to become something else even if vestiges of their former selves survive the upheaval.
The expanded Panama Canal opening, scheduled for May, is now expected to be delayed until later this year. Not mentioned in the IHS report is the growing impact of US east coast cargo coming increasing from Asia via Suez.
There are 25 all-water weekly services to the east coast. BCOs, then, must ask whether east coast ports, with their current infrastructure limitations, can handle these big ships efficiently, said IHS.
The west coast since late December has had a taste of what handling super-postpanamax with the docking of the 15,000-TEU Maersk Edmonton arrived in Los Angeles followed by the 18,000-TEU CMA CGM Benjamin Franklin, which tested all big US west coast ports, safe Portland.
Imports from Northeast Asia led the way, increasing 2.3 per cent, with imports from southeast Asia, the second-fastest-growingregion, at 1.2 per cent growth, according to Mario Moreno, senior economist for IHS Maritime &Trade.
Containerised exports declined two per cent in 2014 and again in 2015 because of the strong dollar, which makes US products and commodities more costly, and weak demand among economically struggling trading partners such as China, Japan and most of the European nations.
West coast ports expected big year-on-year cargo surges in January because of the crippling congestion caused by labour strife in 2015.
Without it, the numbers were astounding. Los Angeles enjoyed a 33 per cent increase in container volume, with imports up 41.6 per cent and exports 1.5 per cent higher. Beach was up 24.8 per cent, with imports up 30.3 per cent and exports up 8.4 per cent. Oakland volume increased 38.5 with imports rocketing 75.8 per cent and exports up 16.8 per cent.
The Northwest Seaport Alliance of Seattle and Tacoma reported a 25 per cent increase in total international container volume, with imports up 33 per cent and exports 16 per cent higher.
Most east and Gulf Coast ports, by contrast, registered record growth in January-February 2015 because of cargo diversions from the west coast. They are therefore expected to report modest growth in early 2016.
BCOs, which had been enjoying some of the lowest rates ever in late 2015, could see some firming of freight rates this year.
David Arsenault, Hyundai Merchant Marine, Americas chief, told the Propeller Club of Southern California that relentless overcapacity had bottomed out last year.
Carriers in 2015 took delivery of a record 214 container ships, with global capacity increasing 8.5 per cent.
Net capacity, after the scrapping of older ships, should increase marginally this year, he said.
Carriers, meanwhile, have reported such large losses - an estimated US$5 billion in 2015 - that they may have no choice but to decouple capacity from freight rates to stop the bleeding.
"We can't continue to do one good year followed by three bad years," Mr Arsenault said.
According to the Shanghai Containerised Freight Index, the spot rate for shipping an FEU from Shanghai to the west coast in December dropped to $766. The spot rate on the longer all-water routes to the east coast was no better, at $1,448 per FEU.
Some east coast ports are deepening their harbours, while New York-New Jersey is raising the height of the Bayonne Bridge to allow passage underneath by the bigger ships.
All majorgateways must pay greater attention to their gate processes to avoid the long truck queues thatports on both coasts struggled with last year.