One hundred days from today the biggest warship Britain has built will be officially named by Her Majesty The Queen. 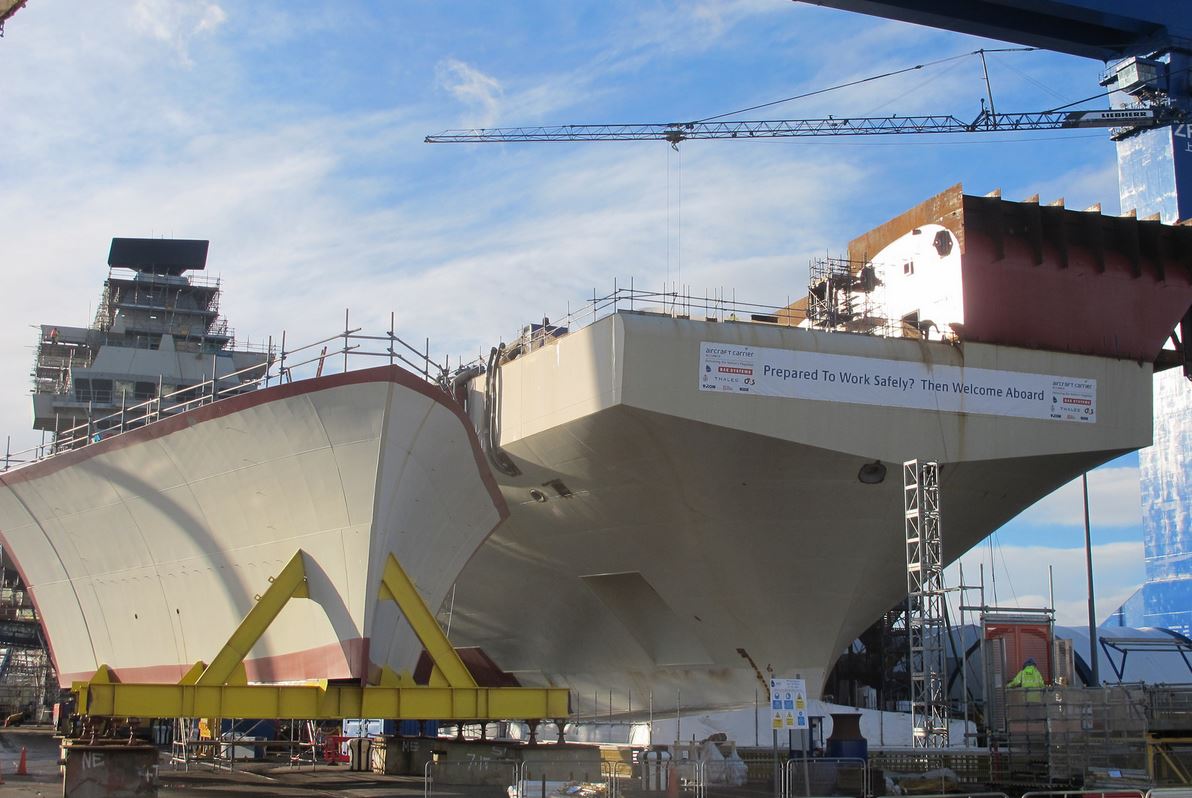 On July 4, the Royal Navy’s new aircraft carrier the Queen Elizabeth will be named by Her Majesty in a ceremony at No.1 Dock in Rosyth on the north bank of the Forth.

With the milestone date now upon them, the 95-strong ship’s company and some 3,000 dockyard engineers, fitters and technicians are acutely aware of what needs to be done to ensure the 65,000-tonne leviathan is ready for her flooding up.

Work under way right now includes fitting one of the two aircraft lifts – capable not just of moving Lightning II jets from the hangar to the flight deck and back but powerful enough to lift the entire ship’s company – and completing the part of the aft island from where flight deck operations will be controlled.

Between now and July 4 – three days shy of the fifth anniversary of the carrier being laid down – the second aircraft lift will be installed, the propeller shafts completed, the integrity of the hull tested to prevent water coming in and, equally importantly, the ship will be painted the Royal Navy’s trademark grey – she’s currently a mix of cream, grey and a reddish brown.

Hand-in-hand with this work being carried out by the Aircraft Carrier Alliance – the partnership between the MOD and the defence industry to build Queen Elizabeth and her sister Prince of Wales – the 95 sailors are starting to test the various systems and equipment on board so they can write the operating manual for when the carrier goes to sea for the first time in 2016.

“It’s going to be a hectic 100 days because we’ll be busy preparing for the event, but also continuing with our work to learn about the ship and her systems to help us develop our operating procedures,” said POET(WE) Steph Simpson who is helping to test and commission the ship’s unique automated weapon handling system.

“The 100-day countdown to the naming ceremony is an exciting landmark – it means that we’re not far from achieving one of the most important milestones in the ship’s life. And, personally I feel honoured to be involved in such an historic day for the Navy, and for the country.”

At 65,000 tonnes, the ship will be three times the size of the current generation of Invincible-class carriers – and one and a half times larger than Britain’s last traditional carrier, HMS Ark Royal, which paid off in the late 1970s.

Because of the way Queen Elizabeth has been constructed– huge sections built at half a dozen yards around the UK, then pieced together in Rosyth in a specially-enlarged dry dock – this will not be a traditional slipway launch.

After the naming the dock will be flooded up and after watertight checks, some days later, she will be towed out into the basin to continue the internal fitting out work.

“The excitement around the naming of HMS Queen Elizabeth continues to grow and the daily countdown will undoubtedly add further momentum to this. We’re working hard to prepare the ship and plan the celebrations which will mark this significant phase in the programme to deliver the nation’s flagships,” said Ian Booth, the carrier programme director with the Aircraft Carrier Alliance.

That will allow the dock to be prepared for the process to start all over again to complete Prince of Wales, sections of which have already been delivered to Rosyth.