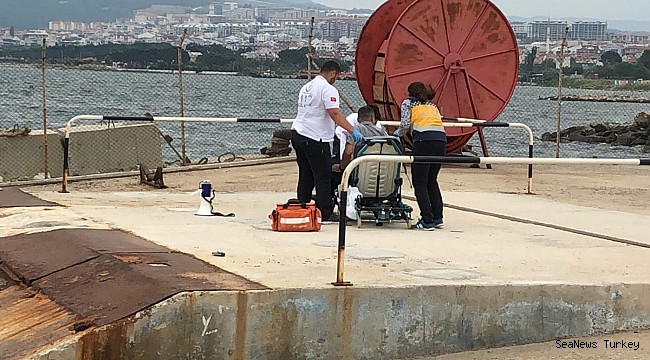 In the context of the drill scenario, efforts were made to prevent possible terrorist acts.According to the scenario; Kepez Port, connected to the "Kepez" named for the technical service personnel who came to the suspect for the failure of the private security officer, continue to follow the cameraman and continue to report to the suspects of the suspects, terrorists in the car section of the vehicle is a bomb, . By warning siren, evacuation is initiated against the possibility of explosion of the bomb.

The terrorists who want to be controlled under the harbor take hostage of the private security officer with the weapons they leave from the hidden sections of the vehicle. During this time, the Police Forces (Military Administrative Officer, Çanakkale Port President, Çanakkale Coast Guard Group Commander, Çanakkale Customs Director) are transferred to the port. The Provincial Administration establishes the security committee and allocates the authority of the port administrative building as the command center.

The spokesman of the terrorists declares that they will demand speedboat, otherwise they will blow up the bomb and kill the hostage. Reported requests will be assessed in the coordination of the Port Facility Security Officer Evren Beceren and will be reported to the terrorists who are accepted.

As the fast boats approach the lima, the terrorists move away from the bomb-laden vehicle and head to the bota with the hostage. At this point, a bomb is blown, a private security officer is wounded. Two terrorists are seized as wounded and the hostage is saved as wounded in the clash to neutralize the terrorists who run the bota. The other terrorist, reaching the fast bota, is inactivated by the offensive bot of the Coast Guard Group Command that follows the open situation.
The wounded are referred to the hospital with ambulances currently waiting. Also fire brigades are intervened in fire brigades connected to Çanakkale and Kepez Municipalities.

In the controlled practice, the Safety Conditions Level within the scope of ISPS Code is reduced to normal and the exercise is completed.