More than a 100 years since RMS Titanic was due to berth in the United States on its grand maiden voyage, a 21st century version of the legendary passenger ship. 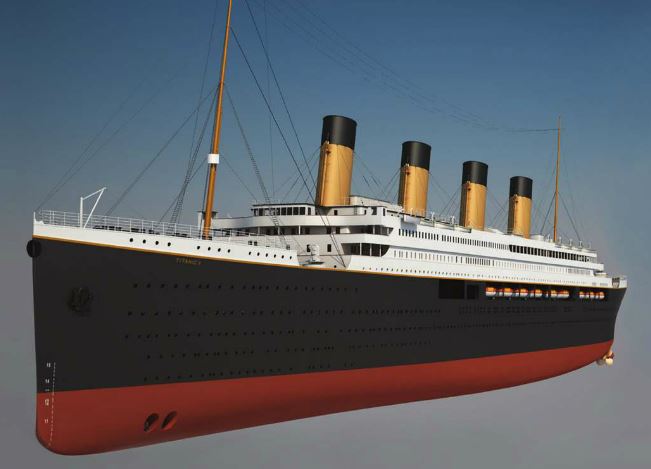 More than a 100 years since RMS Titanic was due to berth in the United States on its grand maiden voyage, a 21st century version of the legendary passenger ship, Titanic II, is coming to New York. Blue Star Line chairman Professor Clive Palmer’s dream for Titanic II has been unveiled at a Global Launch aboard the retired aircraft carrier USS Intrepid, a national historic landmark moored in New York Harbour and now home to the Intrepid Sea, Air and Space Museum.

Titanic II is to be built at CSC Jinling Shipyard Company in Nanjing, China. The shipyard has already begun upgrading its facilities in preparation of the forthcoming construction work.

The Australian billionaire displayed the design plans for Titanic II at a gala black-tie dinner on USS Intrepid attended by more than 500 guests.

“While the focus of this Global Launch is to release never before seen blueprints of Titanic II, the event will also pay tribute to Titanic, her passengers and crew as well as look to the future and celebrate Titanic II,” Professor Palmer said. “Titanic was a ship of dreams and Titanic II will be the ship where the dreams come true.”

He said his plan to build Titanic II and sail her from Southampton to New York on her maiden passenger voyage in late 2016 had generated worldwide interest.

“We have had more than 40,000 enquiries from around the world from people expressing an interest in securing a booking for the maiden voyage,” he said.

Directors Ding Jian Liang and Zhang Qi Ying from China’s state-owned CSC Jinling Shipyard, who have been commissioned by Blue Star Line to build and coordinate the construction of Titanic II in China, attended the New York dinner.

Professor Palmer was also joined by Markku Kanerva, Director of Sales of Finland-based marine design company Deltamarin, which has been commissioned to design Titanic II.

The work carried out by Deltamarin, one of the world’s leading ship design and marine engineering companies, will enable China’s CSC Jinling Shipyard to begin construction of the passenger liner.

Built in Belfast, County Antrim, Ireland, the RMS Titanic was the second of the three Olympic-class ocean liners – the others were the RMS Olympic and the HMHS Britannic (originally named Gigantic). They were by far the largest vessels of the British shipping company White Star Line’s fleet, which comprised 29 steamers and tenders in 1912. The ships were constructed by the Belfast shipbuilders Harland and Wolff, who had a long-established relationship with the White Star Line dating back to 1867. Cost considerations were relatively low on the agenda and Harland and Wolff was authorised to spend what it needed on the ships, plus a five percent profit margin. In the case of the Olympic-class ships, a cost of £3 million for the first two ships was agreed plus “extras to contract” and the usual five percent fee.