Logistical problems have been piling up since a barge sank in the Rhine River last week, severely clogging Europe's busiest inland shipping route. BASF is already struggling with a shortage of certain raw materials.

Logistical problems have been piling up since a barge sank in the Rhine River last week, severely clogging Europe's busiest inland shipping route. BASF is already struggling with a shortage of certain raw materials.

The Rhine River could remain closed to large ships for at least another 10 days, following an accident on January 13 that has left nearly 250 ships stranded and kept hundreds more from leaving port.

Since Wednesday, a number of small vessels have started moving upstream past the accident site on a trial basis. But large barges will need to wait until the capsized ship, the "Waldhof," is removed from the shipping route by four special cranes, according to Florian Krekel from the Rhine Shipping Authority (WSA) in Bingen.

Two barge-mounted cranes arrived at the accident scene on Thursday. Krekel told Deutsche Welle a third crane would be deployed on Sunday, with a fourth expected to arrive on Tuesday.

"The first two cranes will further stabilize the sunken barge and begin stringing cables. We don't expect the vessel to be moved before the end of next week at the very earliest."

Several smaller barges loaded with non-hazardous goods have been allowed to travel upstream past the sunken vessel. "These are just tests for now," Krekel said. "We are selecting boats according to length, width, depth and type of cargo." 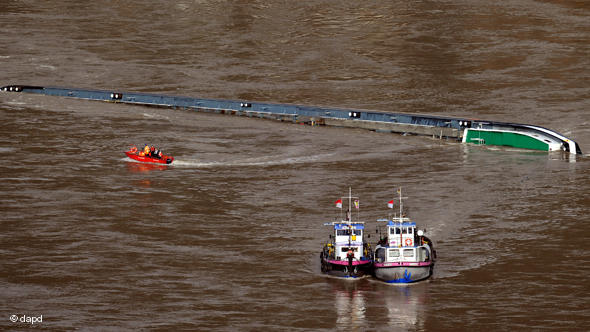 Bildunterschrift: The Waldhof has been blocking shipping on the Rhine since January 13Typically, between 100 and 120 ships pass through Bingen every day, he added.

The Waldhof was carrying a 2,400-ton load of sulphuric acid from German chemical company BASF's main production facility in Ludwigshafen to another plant in Antwerp, Belgium, when the accident occurred at the waterline of the famous Loreley cliff.

Over the centuries, numerous shipping accidents have occurred at the cliff, where the Rhine bends and has strong current. The current has been exceptionally strong in recent weeks due to high water levels.

Initially, there was some concern that the current could dig a hole below the barge in the sandy bottom of the Rhine, possibly causing the vessel to slip and break apart. "The danger is less than we expected," Krekel said. "The boat is moving only slightly."

Rail and road in demand

BASF is among the first companies to acknowledge logistical problems due to the disruption on the Rhine.

"Many of our materials are transported by ship as are many of the products we deliver to customers," a BASF spokeswoman told Deutsche Welle. "We have a shortage of five raw materials and have had to adjust production accordingly."

The Rhine River, which flows to Rotterdam, Europe's biggest port, handles about 170 million metric tons of goods annually. About 80 percent of inland shipping in Germany runs over the Rhine, including ships that enter it from other rivers.

"The Rhine is used heavily to transport containers, coal, oil and many other materials," said Nikolaus Hohenbild, a board member of the German Association of Independent Inland Shipping Companies. "We hope the tests with smaller vessels are successful so some cargo moves. Otherwise, this disruption will cause huge logistical problems."

Germany has around 2,200 inland ships operated by some 100 companies. The sector employs approximately 7,500 people and generates annual revenue of more than 1.7 billion euros.