Citizens of Istanbul saw another naval parade today. Naval parades along the Bosphorus are traditionally held either on 30. August to celebrate the Victory Day or on 29. October to celebrate the Republic Day with participation of Turkish warships. 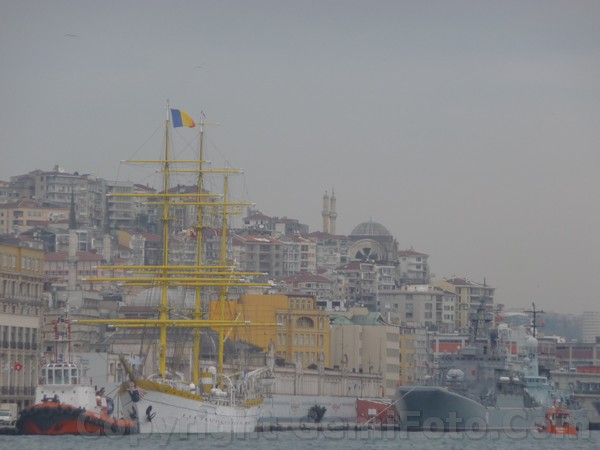 Citizens of Istanbul saw another naval parade today. Naval parades along the Bosphorus are traditionally held either on 30. August to celebrate the Victory Day or on 29. October to celebrate the Republic Day with participation of Turkish warships.

What made todays parade so interesting? Well first of all the majority of the participants were foreign warships. I think that this might be the first parade of foreign warships made on Bosphorus since 1923. Second, today is not a Turkish holiday.

Well the parade was one of the many activities held in the last three days,  to celebrate the 10. anniversary of the foundation of Black Sea Naval Co-Operation Task Group – BlackSeaFor.

One of the activities was a public concert of military bands. There is a video showing public dancing to the musing of one of the bands. The place of this activity is located between the tomb of the famous Turkish admiral Barbaros Hayrettin Paşa and Naval Museum in Istanbul. Here is a second video.

The celebrations are not just all fun. Some serious discussions were made and speeches were held at the Armed Forces College. The Chief of General Staff, General Koşaner said that mechanism and initiatives that made security and stability in the Black Sea permanent had turned Black Sea into a sea that produced security for the vicinity and the globe.

The Black Sea continues to be a sea that is not facing any serious problems in regard to asymmetric threats, and that continues to be a secure sea, and is an example to the entire world. Contrary to conflicts in other geographies, I would like to express my belief that the Black Sea, which has geopolitical importance in the Eurasia where the majority of world history was written, will continue to be a sea of peace, friendship and security

Out of so many divers activities, I of course was focused on the naval parade.

The parade started with the Turkish frigate F-240 TCG Yavuz.

Next in line was the Romanian frigate F-111 ROM Marasesti. She is the flagship of this activation of the BlackSeaFor, as Romania is commanding.

Bulgarian frigate 42 BNS Verni was the third ship on the parade.

She was followed by Russian large landing ship 156 RFS Yamal

The Ukrainian command and control ship U-510 Slavutich was next.

The last ship of the parade was the Georgian Coast Guard vessel P-24 Sukhumi.

The Romanian training ship Mircea was a part of the parade too. But she arrived 15 minutes later, than the rest of the warships.

This was the second parade organised in Turkey less than a month. I will be covering the 10. anniversary of BlackSeaFor.