Big shipbuilders in the doldrums

Korea’s three biggest shipbuilders are struggling to win orders, as China cements its status as the world’s top shipbuilder. 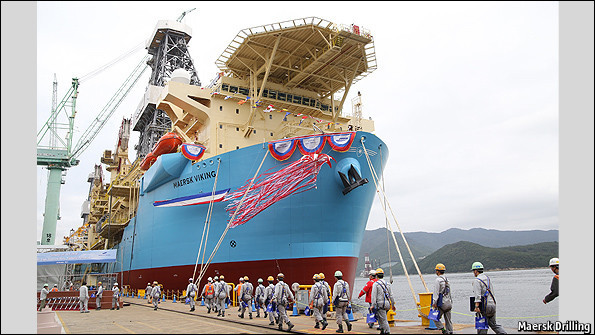 Big shipbuilders in the doldrums

Korea’s three biggest shipbuilders are struggling to win orders, as China cements its status as the world’s top shipbuilder.

Hyundai Heavy Industries, Samsung Heavy Industries and Daewoo Shipbuilding & Marine Engineering combined for $14.6 billion in orders during the first half of the year, which translates to 26.8 percent of their goal.

Last year, all three surpassed their goals. HHI won $25.7 billion in orders, $1.9 billion more than its goal for 2013. In the first half last year, the company had 51.7 percent of its target.

Samsung Heavy Industries last year secured $300 million more than its target. After the first six months, it was three-fourths of the way to its $13 billion goal.

DSME also achieved 41.5 percent of its annual order in the first half and exceeded its $13 billion goal by $600 million.

Industry insiders attribute the shipbuilders’ 2014 struggles to fewer overall orders for expensive offshore drilling platforms and plants, the top contributor to last year’s performance. They have combined for only $3.9 billion in offshore plant orders this year through June, down 77.4 percent from a year ago.

“Major oil companies are delaying offshore plant orders, and the shale gas boom in North America is affecting their decisions,” said an official from HHI. “We are closely following the market situation.”

If the slump in offshore plants continues, industry observers said Korean shipbuilders should quickly move to merchant vessels to shore up their performance.

“In the second half, shipbuilding orders should improve gradually as financing and financial policies are set to be eased in Europe,” said Sung Ki-jong, an analyst at KDB Daewoo Securities. “Orders for tankers, LPG and LNG carriers, and container ships are expected to be issued.”

According to data from Clarkson, a U.K.-based company researching the shipbuilding and shipping industries, Korean companies won orders for 5.55 million compensated gross tonnage (CGT), or 164 vessels, in the first half, which is down 29.5 percent from a year ago. The country’s share of global shipbuilding orders dropped 4.7 percentage points year-on-year to 27.1 percent.

CGT is a measurement of shipbuilding output calculated by applying a conversion factor that reflects the amount of work required to build a ship in relation to the vessel’s gross registered tonnage.

China had 9.09 million CGT, or 481 vessels, in the first six months of this year, which is down 7.8 percent from a year ago. However, its market share jumped from 39.9 percent to 44.4 percent. From January to June, global order volume decreased 17.2 percent year-on-year to 24.73 million CGT, according to Clarkson.

What’s more worrisome for the Korean shipbuilding industry is that the value of its orders also trails China. Last year, Korea collected $21.7 billion in the first half, beating China by $4.4 billion. However, for this year, China had $14.5 billion, surpassing Korea by $1.3 billion.