Big search for man overboard from MSC SIENA at Rottnest

POLICE will search into the night for a 27-year-old Filipino man who fell overboard from a bulk carrier near Rottnest Island this morning. 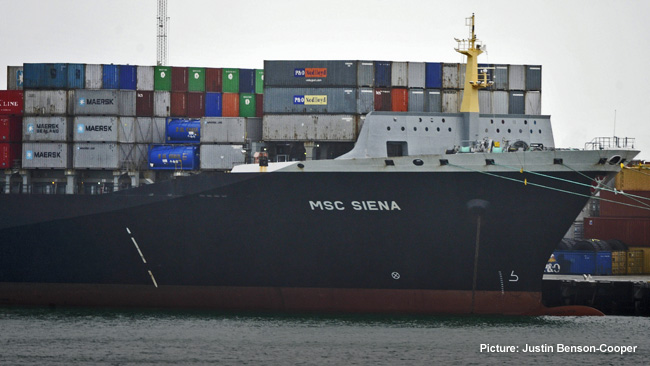 MAYDAY: MSC Sienna, which called for assistance for a man overboard this morning. Picture: Justin Benson-Cooper Source: PerthNow POLICE will search into the night for a 27-year-old Filipino man who fell overboard from a bulk carrier near Rottnest Island this morning.

Water Police Senior Sergeant Greg Trew said they received a mayday call from the Mediterranean Shipping Company vessel Siena about 11.30am to say a crew member on board saw the man fall overboard into the ocean.

“He was washed off the front of the boat by a wave,” Snr Sgt Trew said. “He had a harness on and the harness gave way.”The container ship was three nautical miles west-northwest of Rottnest Island when the man was swept away.PerthNow understands that the missing man was throwing a rope ladder over the side of the boat to allow a pilot aboard to steer the vessel into port when the incident occurred.

Return to start of sidebar. Snr Sgt Trew said the RAC rescue helicopter, the police helicopter Poliair, and a shark patrol helicopter had joined the search, and sea rescue personnel and water police were scouring the ocean for the missing man. “We’ve got eight boats out there – volunteer marine and rescue boats, water police boats, and a fisheries boat  - and we’re searching in the area now,” he said.“It hasn’t been very fruitful.“We’re going to change crews between 5 and 6pm tonight and run them into the night.”Snr Sgt Trew said police had grave concerns for the welfare of the man.

“With the passage of time, his survival rate certainly decreases dramatically,” he said.“We’ve found the life rings that were thrown over but we haven’t found him.” MSC Siena last stopped in Melbourne and was on its way to Fremantle. The vessel was searching for the man this afternoon but has now berthed in Fremantle.Snr Sgt Trew said the crew members on board were “absolutely” distressed.

“They want to stay out there and search but we’ve asked them to come in so that we can get some more information,” he said.Keith McCorriston, of the International Transport Workers Federation spoke to PerthNow after being on the vessel.He said the mostly Filipino crew were shocked by the disappearance of a fellow crewman and they were still hoping he would be found."They are all visually distraught and speaking to police tonight," he said. "I will go back on board tomorrow to carry out an investigation."Mr McCorriston said it is not the first time a crewman had gone overboard off the WA coast and that the Federation was concerned about training and operating procedures used by crews who operate through Australian and international waters."I'm actually alarmed by the amount of seafarers that go missing. We have had two or three go missing off the West Australian coast in the past 8 to 12 months", he said.
This news 13792 hits received.
ANASAYFAYA DÖNMEK İÇİN TIKLAYINIZ
These news may also interest you
Horrible accident in the Strait of Malacca: Container ship collides with bulker!
X-Press Pearl fire shows need for care in hazmat shipping