BANGLADESH's first inland port will be established as a joint venture to operate a 300,000-TEU container capacity terminal in Nareayanganj serving Dhaka. 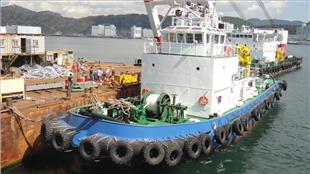 Mr Sutcliffe has managed the takeovers at Boston Docks and PD Ports on the UK east coast as well as founding DCT Gdansk in 2001.

Mr Suttcliffe, Evo-Port's CEO, said the Dhaka development "is a first, as we will be barging the containers down to Chittagong and Mongla ports and then reloading to deep-sea vessels." and that barges will handle 50 containers each, operating shuttle services to ports some 250 kilometres from Dhaka through river systems.

Separate from the a 15-year equity investment and management contract, Port-Evo also expects to work with the Bangladesh government on construction of a container terminal at the southern port of Mongla.

Port-Evo will have a 49 per cent stake and raise US$60 million on the debt market for the $100 million project cost, said a Port-Evo consultant, Shipwrights Resources managing director Mahboob Ahmed.

"Everyone opts for bank finance for funding but we have gone for equity finance and Port-Evo is our partner of choice," he said.

Rupayan has put in US$22 million which kicked off construction in September on 27 acres on the bank of the Shitalakhya River, reported Lloyd's Loading List. The terminal will be equipped with an online container tracking system, customs and other regulatory agencies, agricultural inspection and quarantine areas.

The facility will work primarily as a supply chain inland feeder hub for Chittagong and Mongla, serving Dhaka-based importers and exporters.

The Dhaka-Chittagong corridor contains some 32 per cent of Bangladesh's population and generates 50 per cent of the country's GDP and 85 per cent of its foreign trade.

"The terminal will start operations early next year as the quay wall piling has already been started by Rupayan," Mr Suttcliffe said, adding that the Mongla port project "will complete our plans to develop a new logistics chain for Bangladesh imports and exports".