Babcock has successfully completed the first phase of a contract awarded by Shell, to integrate a novel self-stabilising gangway system onboard the subsea construction vessel MV Island Enforcer, providing pedestrian access for workers from vessel to offshore platform as required. 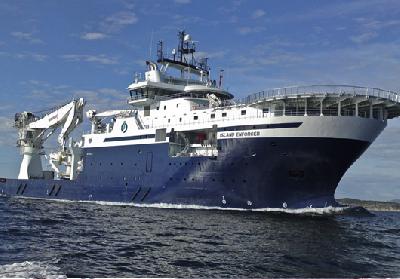 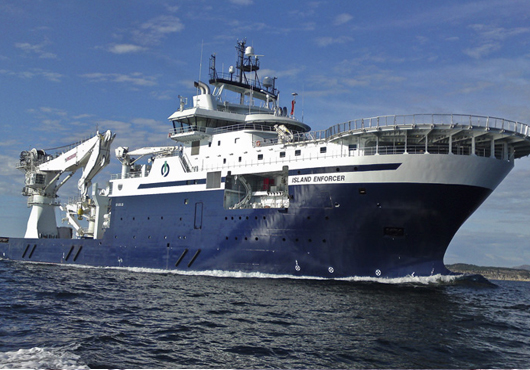 Babcock has successfully completed the first phase of a contract awarded by Shell, to integrate a novel self-stabilising gangway system onboard the subsea construction vessel MV Island Enforcer, providing pedestrian access for workers from vessel to offshore platform as required.

The integrated system has now been mobilised for its offshore deployment to connect to the main deck level of the Shearwater installation in the North Sea, and was delivered on time for operations to commence. Availability of the vessel to Shell’s Shearwater facility for the planned shutdown was critical to successful delivery of the contract. The contract follows a similar project completed by Babcock for Shell last year, which was the first ‘Walk-to-Work’ gangway concept connection on a Floating Production Storage Outlet (FPSO) vessel in the UK Continental Shelf.

Under the new contract, Babcock has engineered, designed, fabricated and installed the structures to support the integration of a ‘Walk-to-Work’ self-stabilising gangway system and air diving spread equipment and install this on the host vessel Island Enforcer chartered by Shell UK, as part of the vessel mobilisation. The self-stabilising gangway system compensates for vessel motion to provide safe offshore access enabling employees to ‘Walk-to-Work’, thereby reducing the need for more costly alternatives such as helicopters and conventional flotels.

Babcock completed the integration project in just two months, following contract award – a tight timeframe to design, fabricate and install the total system. Once fitted, the equipment underwent a trials programme to ensure satisfactory operation before going into service on a fixed platform in the North Sea, where it is currently operating in highly demanding conditions before relocating to a FPSO. The vessel was mobilised in one week from Babcock’s Rosyth facility, for its first phase deployment.

A second turnaround will also be undertaken at Babcock’s Rosyth facility, where the gangway system will be repositioned on the vessel. Further structures and equipment to support planned diving operations will also be integrated. To meet the deadlines involved, Shell has used the first integration and mobilisation programme as far as possible to integrate the equipment required during its second deployment, to maximise operational utilisation offshore.

As always safety was a top priority for Babcock in delivering the contract, and the first mobilisation was completed with zero incidents, which reflects the high standards of both Babcock’s and Shell’s safety focused culture.

“Key criteria to the success of this contract are safety, timeliness, quality and cost, which have all been successfully achieved in the first phase,” Babcock Commercial Operations Director David Dobson said. “Hard work and collaboration between our engineering and production teams, and with our subcontractors, and processes applied to maximise efficiency, have resulted in a safe and successful delivery of the first mobilisation. We now look forward to the next stage of the project to once again demonstrate our ability to deliver projects to the high standards and stringent demands of the offshore environment.”

Shell Marine Contract Holder Richard Bounds said: “Babcock was awarded the contract to support our vessel mobilisation in their Rosyth facilities for a ‘Walk-to-Work’ project based on previous Group experiences of their support and ability to deliver on time. The design, engineering and fabrication phases were successfully completed within a short time frame. Installation was also completed within the scheduled timeframe and was safely supported by Babcock’s personnel throughout. Shell looks forward to achieving the same results for the second phase of the project when the gangway system is relocated on the vessel and the air diving equipment spread is installed.”